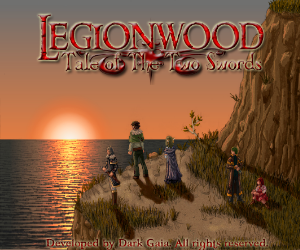 Legionwood: Tale of the Two Swords (or just Legionwood) is a popular PC RPG game released by Dark Gaia Studios

(who also created the popular One Night Trilogy and the novel Sun Bleached Winter) on February 10, 2008. It's a 16-bit style JRPG in the tradition of Final Fantasy and is best known for its epic gameplay length and extremely tough battles.

Players take control of Lann Northwise and his sister Liana as they attend a local festival, only to witness their king being assassinated by a mysterious villain. Joining up with other anime styled characters, such as Ark, the famous general and Alexis, a pirate (there's even a naive princess, too) they try to find out who is behind the assassination plot and soon discover that a clandestine organisation is working behind the scenes to turn each of Legionwood's nations on each other and thrust the world into a brutal war. What follows is a pretty exciting story all about love, betrayal, forgotten secrets and reincarnation.

The game is linear for the most part though there are quite a fair number of side-quests and optional bosses to tackle, and a pretty innovative character development system where you choose your characters' stats as they level up and are free to teach them any skill or give them any equipment, even though nobody will be good at everything - and you can even reassign your stats at any time and redo your character builds if they aren't working.

A sequel called Legionwood 2: Rise of the Eternal's Realm was released on February 28, 2014. It takes place 300 years after the events of the first game and pits a new cast of characters up against the undead, gateways to other worlds, and hordes of barbarians. Unlike the first game, it's a commercial release, but it only retails for five bucks and a free demo containing the first hour of the game is available here

In Legionwood 2, the player controls Lionel Lucem, an imperial soldier of Trevelle whose objective is to defend his homeland from invaders. Eventually, Lionel discovers that the current crisis gripping Legionwood is related to the events of the first game, and his relatively simple mission becomes a desperate struggle to prevent history from repeating itself. At key points in the game the player is called upon to make a choice, which influences the story and decides which of the Multiple Endings plays at the end of the adventure.

The third game in the series, Heroes of Legionwood, is an episodic RPG taking place one century after an apocalypse. Its first installment, Age of Darkness was released on July 24, 2015. Its second, Resurrection, was released on March 3, 2016. And its third/final, End of Days, was released on August 28, 2017.

The Legionwood games provide examples of these tropes: