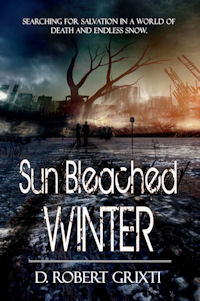 In this world, there are massive trees.
Advertisement:

" responsible for a series of popular RPG Maker survival horror games. It was first published on December 1st 2012 by Damnation Books LLC and is available in paperback and ebook formats. Sun Bleached Winter currently holds the distinction of being one of the first (if not the first) published novels to come from someone in a community usually known to only turn out short Japanese role playing and adventure games.

Sun Bleached Winter is the story of Lionel and Claire Morton, two siblings left to survive in a crapsack post-apocalyptic world in the aftermath of a worldwide catastrophe. The novel follows their day to day efforts to stay alive as they brave a series of increasingly dangerous threats (such as post-nuclear winter, deranged cannibals and rabid, mutated dogs) while trying to get to "New City", a mythical sanctuary where civilization is said to have been preserved. The psychological horror element of the novel comes from the fact that it is presented in first person from Lionel's point of view, and the reader gets to see him gradually succumb to depression and insanity as he copes with the consequences of having to make immoral choices to survive and the psychological effects of various terrifying events he and sister experience.

Much like The Road, Sun Bleached Winter really plays up the emotional part of living in a post-apocalyptic nightmare. Lionel's outlook is pretty grim from the start and the author isn't afraid to kill off major characters to make the tone even more bleak and hopeless than it already is, and early reviewers have noted the book's depressing slant to be its main defining feature.