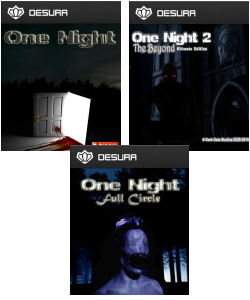 The One Night Trilogy (sometimes referred to simply as One Night, after the first game) is a series of freeware survivalHorror/adventure games created by Dark Gaia Studios

(who later went on to write sci-fi novels) in RPG Maker VX, comprised of One Night (2008), One Night 2: The Beyond (2010) and One Night: Full Circle (2011). The three games, presented in non-chronological order (much like Yahtzee's Chzo Mythos) chronicle the struggles of a series of protagonists against a supernatural race known as Shadow People that attempt to undermine the human race. The series' story is known for being particularly complex and branches across multiple timelines and alternate dimensions, though it's mainly just an excuse for the horrors that the characters are subjected to, which, by RPG Maker standards, are pretty damn scary.

The One Night games are regarded by most as being some of the better horror games to come out of the RPG Maker scene, having been reviewed and featured in gaming magazines such as PC Gamer, as well as being the subject of several Let's Play videos, which usually involve people screaming incoherently into microphones with a shaky scare-cam. The first game is notable for being the very first survival horror game made in the engine. In 2012, the author of the games released polished versions of each one with rewritten dialogue and additional puzzles, and the games continue to be updated on a regular basis. The three games are free to download here

A follow up to the series, titled One Night 4 was announced in early 2013. Funds for the game's development were raised through an Indiegogo campaign, and a playable demo of the game which includes the first area has since been released. Initial fan reaction is that the game is quite a departure from the original trilogy, though this seems to be intentional, as the developer has stated that he intends to give the series a graphical overhaul and reinvent the gameplay. However, it was ultimately cancelled, as the creator refocused on the Legionwood series.

The One Night games contain examples of these tropes: