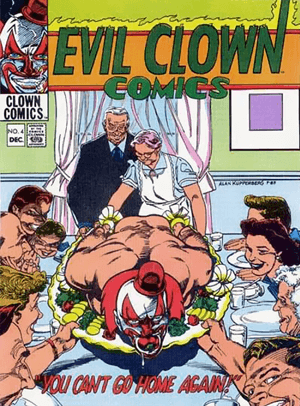 Does this taste funny to you?
On Sundays, your household dined with the curtains closed. Candles lit plates piled with red meat. It was not fish. It was not chicken. It was not pork. It was not beef.
— Sunday Dinners facet, Sunless Skies
Advertisement:

One way to build family togetherness is to dine together on a routine basis. This is especially true when non-family are likely to end up as the main course for dinner. It becomes very important that everyone understands you are part of the family.

There is an old saying: A family that plays together stays together. The cannibal clan does both. They play with their food.

This horror trope can be traced back in Western storytelling at least to the 16th century. There are widespread stories, perhaps only myths, of the cannibal Sawney Bean clan in Scotland. Whether or not they existed doesn't matter much to us here. What's interesting about the stories is that all the elements of modern horror tales about families of cannibals are present in Sawney Bean Clan stories: inbreeding, pickled people-parts on shelves in the home, hunting forays where the hunters toy with the prey mercilessly, stranded travelers being lured in by offers of wayside assistance, all taking place in remote, desolate locations.

Unlike the Cannibal Tribe, who are Hollywood Natives eating people because that's their weird and foreign culture, the Cannibal Clan will usually represent an intranational, rather than international, cultural split. The classic Cannibal Clan will be Corrupt Hicks terrorizing the City Mouse protagonists. They don't exist on the dark corners of the map where there be dragons, but in isolated pockets of savagery in the heart of what's supposed to be civilization.

Compare The Family That Slays Together. Also see Hillbilly Horrors, with which this trope frequently overlaps, and Cannibal Larder, which these characters often keep.