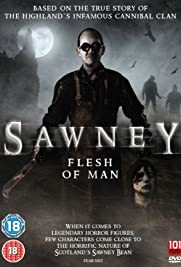 Inspired by the most prolific serial killer of all time
Advertisement:

Sawney: Flesh of Man is a 2012 British Slasher Movie based on the Sawney Bean legend.

Hamish MacDonald is a journalist covering a series of murders, railing against the police's incompetence at every turn. Unfortunately, this gets him the attention of the killer Sawney Bean, who has been kidnapping people and dismembering their bodies as food for his relatives. Sawney kidnaps Hamish's fiancee to become the next meal, and to send a message to his nemesis. However, as Hamish tries to rescue his lady love, something is stirring in the cellar that threatens to destroy them all.

The film was distributed in America by Lionsgate.