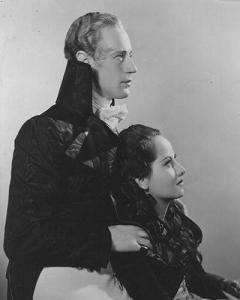 Look, Marguerite — a Trope.
They seek him here, they seek him there.
Those Frenchies seek him everywhere.
Is he in heaven? Is he in hell?
That demmed, elusive Pimpernel.
— Sir Percy Blakeney
Advertisement:

The Scarlet Pimpernel is the 1934 film adaptation of the classic action-adventure novel written by Baroness Emmuska Orczy. The film was produced by Alexander Korda, like Orczy Hungarian in origin, as was his co-writer Lajos Bíró, and indeed their star, Leslie Howard. Oddly enough, Howard, who made the part of Sir Percy so much his own, was not Korda's first choice: having had a major hit with The Private Life of Henry VIII, he had wished to cast Charles Laughton (!) in the part, but was thwarted by critical, popular, and authorial outcry. Korda consoled himself by casting his Anne Boleyn, Merle Oberon, in the part of Marguerite, though Orczy herself considered her unsuitable. The film was given to Rowland Brown to direct, but Korda almost immediately dismissed him (perhaps feeling that Brown, a veteran of American gangster films, was mishandling this quintessentially English story), and assumed directorship himself, giving the film over to another American, Harold Young, for finishing touches.

The film was a triumph of sheer stylishness. Leslie Howard clearly enjoyed himself as Sir Percy; he passes through the fine gradations between the foppish imbecility of his public behaviour, his harder-edged frivolousness toward Marguerite, and the passionate lyricism of his tributes to his two loves, Marguerite and England, with the ease (as he might put it himself) of "a swallow's flight." Raymond Massey's Chauvelin is a figure of genuine menace: he seems somehow less human than some monstrous force of evil pursuing the innocent. The other rôles are equally well sustained: the fatuous but good-hearted Prince George (Nigel Bruce); the kindly and wise de Tournay (O.B. Clarence), his stiffly aristocratic wife (Mabel Terry-Lewis), and charming daughter Suzanne (Joan Gardner), who falls in love with the handsome if somewhat feckless Sir Andrew Foulkes (Anthony Bushell) all make an impression of noble decency that contrasts vividly with the brutal revolutionaries led by the waspish Robespierre (Ernest Milton). Korda's sets and costumes are handsome and lavish, the only failure in production values is perhaps in the rather sparse music.

And in the script. Though the dialogue — at least Sir Percy's — is uniformly witty, the plotting and characterization seems somewhat haphazard. Many actions of the Pimpernel's and his foes are merely narrated rather than seen: we are told that Percy has managed an escape, we are told that Chauvelin's agents have intercepted a message, we are told Chauvelin has figured out that Percy is the Pimpernel — and all these things take place offscreen. Nevertheless, the film maintains its reputation as a classic.

In 1792, as the Terror rages, the "Scarlet Pimpernel" (secretly Sir Percy Blakeney) rescues the family of the Count de Tournay from execution, though the count himself is still held by Robespierre. We learn that he does this to make up for the denunciation of an aristocratic family by his wife, the former Marguerite St. Juste — a denunciation which has estranged the couple. His bother-in-law Armand informs him that the Revolution's agent, Chauvelin, is hunting him. Chauvelin manages to obtain evidence linking Armand to the escapes, and threatens Marguerite that Armand will be executed if she does not find which of her English aristocratic friends is the Scarlet Pimpernel. She manages to obtain a note from Sir Andrew Ffoulkes telling when and where the Pimpernel is going to strike next, and informs Chauvelin. Later, she tells Percy what she has done and why, and informs him that Chauvelin had tricked her into denouncing the St. Cyrs after the Marquis had had her sent to St. Lazare when his son had fallen in love with her. Percy, without informing Marguerite of his secret, resolves to rescue Armand. Chauvelin now knows that Sir Percy is the Pimpernel, and Marguerite realises the same when she sees the Pimpernel badge in a painting of one of Percy's ancestors. She rushes to France to rescue him, but is trapped by Chauvelin there. When Percy arrives at the rendezvous, he recognizes the disguised Chauvelin and is able to have Armand and de Tournay rescued, but agrees to go to the firing squad if Chauvelin sends Marguerite to his waiting ship. Chauvelin accepts; but the firing squad proves to consist of Percy's men; the Frenchman is imprisoned in the basement, as Percy and Marguerite sail off to England, their future happiness assured.

The film was re-made in 1950 as The Elusive Pimpernel, with David Niven as Sir Percy, Margaret Leighton as Marguerite, and Cyril Cusack as Chauvelin. A sequel, The Return of the Scarlet Pimpernel, had already appeared in 1937, with Barry K. Barnes as the Pimpernel, Sophie Stewart as Marguerite, Francis Lister as Chauvelin, and a young James Mason as a sympathetic member of the Assembly. In 1941, Leslie Howard adapted the general concept of the film for his own "Pimpernel" Smith, in which an English archæologist smuggles refugees out of Nazi Germany; this film is credited with having inspired Raoul Wallenberg in his campaign to rescue tens of thousands of Jews from the German death camps.

For other adaptations, not derived from the Korda film, please see the list at The Scarlet Pimpernel.