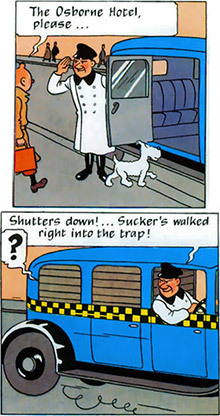 Psmith: Sherlock Holmes was right. You may remember that he advised Doctor Watson never to take the first cab, or the second. He should have gone further, and urged him not to take cabs at all. Walking is far healthier.
Mr. Parker: You'll find it so.
— Psmith, Journalist
Advertisement:

Out of all the cabs in all the city, the Hero, his significant other, or another important person will invariably get on the one that the villain is driving. If they're particularly alert, they might notice they aren't headed to the park before the villain reveals himself and uses Knockout Gas or locks all the doors from the front of the vehicle. (They never notice before they enter the car.)

As anyone who lives in a large metropolitan area can attest, cabbies and people looking for a taxi are aggressive and a dime a dozen; so the odds of a Villain or his Evil Minions catching their target without another cab swerving in ahead of them, or having a pushy fare cut in front of the victim, are particularly slim. This is also ignoring the possibility of the intended target biking, busing, taking the subway, metro, getting a friend to pick them up, or just plain walking.

This trope is named for the less common but more iconic scene where the target's personal driver is replaced by the villain, leading to a "You're Not My Driver" quickly followed by a one-liner from the impostor and some knockout gas or a gun to the face. It often comes with the added implication that the poor driver is lying face down in a ditch somewhere. This method is more believable than taxi-napping a victim, since the target invariably comes to the villain but still slightly odd because nobody ever notices this until after they're in the car.

This trope is not necessarily limited to taxis and limos either, but also planes, boats, and even zeppelins. A particularly nasty variation has an ambulance full of apparent paramedics turn up who are actually bad guys there to finish off the survivors.

See also Sinister Car, The Taxi, Fridge Logic, Gambit Roulette. Harmful to Hitchhikers is a related trope, in which a person is victimized after accepting a ride from a stranger.

Turns out that the answer is, "kind of."