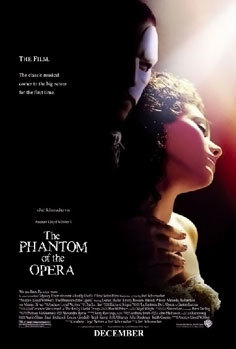 The Phantom of the Opera is a 2004 British film adaptation of Andrew Lloyd Webber's 1986 musical of the same name, which in turn is based on the French novel Le Fantôme de l'Opéra by Gaston Leroux. It was produced and co-written by Lloyd Webber and directed by Joel Schumacher. It stars Gerard Butler in the title role, Emmy Rossum as Christine Daaé, Patrick Wilson as Raoul, Miranda Richardson as Madame Giry, and Minnie Driver as Carlotta Giudicelli.

This adaptation provides examples of: