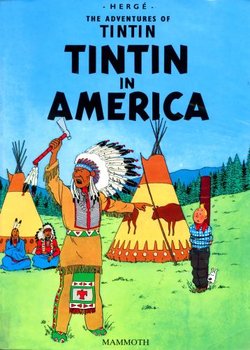 It's 1931 and having dealt with Al Capone's diamond smuggling operation in the Belgian Congo Tintin and Snowy head for Chicago to clean up Gangsterland. He almost at once runs afoul of Al Capone himselfnote Capone is the only real person to appear in the Tintin stories but manages to evade the mob boss only to find himself making an enemy of Capone's rival Bobby Smiles.

Smiles repeatedly tries to have Tintin killed but after the young reporter turns the tables on him Smiles flees Chicago for Redskin City and Tintin spends most of the rest of the adventure trying to bring him to justice. He returns to Chicago in time for a showdown with the rest of the mobsters.

For many years Tintin in America was the earliest adventure available in English and it shows. Aside from Tintin and Snowy there are no other familiar characters, the plot (and research) is near non-existent, and Snowy still talks (admittedly only on one page).