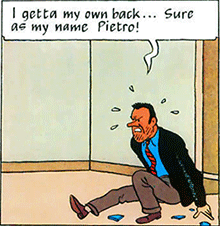 "There's something wrong here... or my name is Jose Santos de Guatemala! And it's not!"
— Courage, Courage the Cowardly Dog
Advertisement:

A stock phrase used as a "guarantee" that something is or will be true. The idea is the person is so sure of it, he will bet his name on it, which may have grown out of the belief that names have power. Occasionally played for irony if the speaker is using a false name. Also used in variations of "If this isn't true (or won't happen), my name will be [specific other name]", often involving an uncool or unfortunate name.

May be used as a handy way of having a new character provide his name if he otherwise would have no reason to do so.