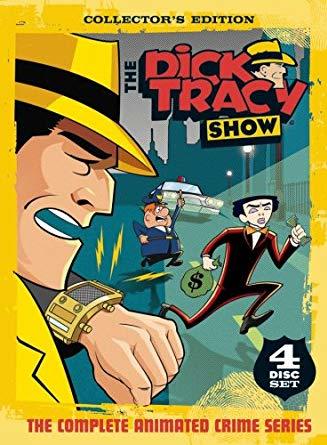 The Dick Tracy Show is an American animated TV series based on Chester Gould's comic strip crime fighter. The series was produced by UPA for syndication in the 1961/62 season and was farmed out to three studios (Jack Kinney, Larry Harmon and Grantray-Lawrence) as UPA had closed down its animation unit. The series consisted of 130 five-minute episodes, and each station used its own on-camera presenter, usually dressed in a police uniform.

Instead of pursuing the criminals himself, Tracy assigned the cases to various second-stringers:

Despite the show's title, Dick Tracy usually appeared at the beginning of the cartoon to assign the case, then only twice more in each animated segment. Once would be in the middle of the action, when the good guy would shout, "Hold everything!" At that point all the action would freeze, and the hero would call Tracy on his two-way wrist radio to fill Tracy in on how things were progressing. The action would resume when Tracy radioed back, "Six-two and even...Over and out!" The last time Tracy would be seen was at the end, to praise his men for their good work. On rare occasions Tracy showed up on screen during the story to get involved.

The series was revamped and re-syndicated in 1990 to take advantage of the publicity surrounding Warren Beatty's big screen version of the character. The Joe Jitsu and Go-Go Gomez cartoons were initially rebroadcast as part of the package, although they were soon pulled and only Heap O'Calory and Hemlock Homes cartoons remained. Tracy would appear in animation again in 1971 as a segment of Filmation's Archie's TV Funnies, which was a much more faithful adaptation to the comic strip of that time.

Tropes That Appear in The Dick Tracy Show