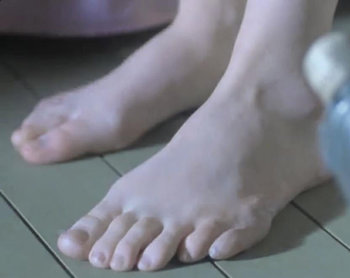 We all know the problem here... That bottle that appears in the take!
"You have six fingers on your right hand. Someone was looking for you."
— Westley to Count Rugen, The Princess Bride
Advertisement:

If you want to emphasize that your character is somehow "different" from everyone else, you can underline this by giving him/her a physical deformity; one of the most popular options is extra digits. The reason for this choice is simple: unlike many other deformities which look "obviously wrong" and therefore repulsive at first sight, a sixth finger or a toe may look perfectly normal and not be noticeable unless one deliberately counts them.

Depending on the Writer, it can be either an obvious defect (probably symbolizing covert malignity of the person) or a Charm Point emphasizing how adorably unconventional the character is. It may also serve a functional purpose: with extra digits, the character may be able to do something no one else can (like playing certain piano compositions). Often, it is relevant to the plot because it reveals that a character is secretly related to another character with the same trait, or it otherwise says something about their ancestry. It can also serve to distinguish the character if a description of them is necessary: if you're looking for a six-fingered man, it's easier to just say that than to describe features such as age and hair color that could apply to lots of people.

Non-human entities, animals and monsters do not qualify for this trope, with the exception of human-like species who are only distinguished from humans by a different number of digits.

Contrast Four-Fingered Hands, which is usually just used in animation to make human hands easier to draw, and Off-Model, where a character may be accidentally given this trait in an animation error.

In Real Life, this condition is called polydactyly

. Sometimes the finger is just a flesh stub, but in rarer cases, it's an actual, functional sixth finger. In the latter case, this condition is actually Cursed with Awesome: studies show that people with functional sixth fingers are able to perform tasks better than the others, and develop extra brain functions

Interestingly, extra digits are actually a dominant trait over the recessive five digits. This is likely due to the fact that the earliest tetrapods (four-limbed vertebrates) actually had as many as eight digits per limb, though later tetrapods reduced it to a maximum of five. The genes to create extra digits remain, but are inactive.

For more prurient examples of extra body parts, see Multiboobage and Triple Nipple. For aliens see Spare Body Parts. A race with a different amount of digits is likely to use an Alternative Number System.