Literature / The Secret of Castle Cant 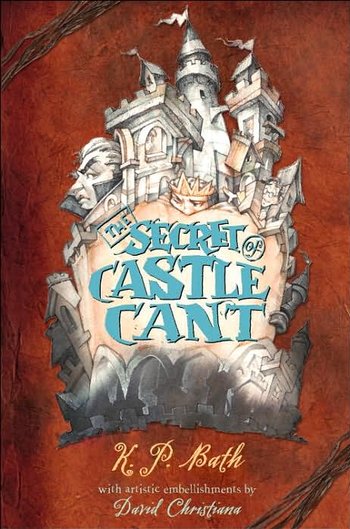 The barony of Cant is a tiny place, not often found on maps. (It's often printed on them, it's just not often found. It's that small.) Its residents live a simple existence, and tend to distrust anything from outside their tiny, moutain-cloistered kingdom. (They consider such places the "outlands"—so anything from them is definitely "outlandish.") It is presided over by a noble Baron named Adolphus. Adolphus has a daughter, named Pauline, who has a maidservant, named Lucy. And that is where the story begins.

Lucy and Pauline are going about their business at the castle one day, planning a prank that will launch underwear into the castle walls, but, in the process, they accidentally put a halt to an execution. They wouldn't think much about it, until an accident leads to them being mistaken for friends of the prisoner. Lucy, who takes the blame for all of Pauline's schemes, is roped into being a spy for the Cause, a secret rebel sect within Cant. But that's only the beginning of the trouble, as Lucy finds herself dragged into a web of intrigue that involves trade wars, a succession crisis, printing manifestos, and the horrible truth of what really happened to Lucy's parents.

Everyone has some different design for Lucy, be it as a spy or a servant. But Lucy just wants to keep her mistress Pauline safe. What will become of the two girls, when they learn the truth of Castle Cant?

This piece of Children's Literature was written by K. P. Bath.