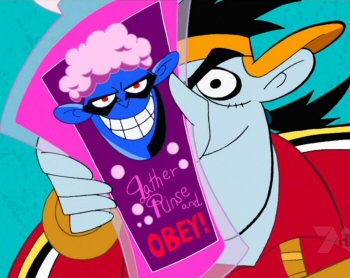 Side effects do not include loss of individual personality.
"Pleasing taste, some monsterism."
— The Simpsons
Advertisement:

A well known corporation has just come out with an amazing brand-name product. They've spammed it over every media channel, and everyone is using it because of its "health benefits".

Obviously the world is coming to an end, if consumerism has gotten to that point. It can't get any worse than this, right? Wrong! For whatever reason, the product in question May Contain Evil, and that "may" is silent.

So now people are mutating into evil monsters and are on the loose, the rest are being mind controlled and dying left and right, and the product is insanely addictive. Remember, ALWAYS read the small print, particularly the ingredients list.

This plot often occurs in Wake Up, Go to School, Save the World-type shows, as it easily connects a mundane plot (Drinking/peer pressure/vanity...) with an adventure plot (aliens/zombies/mind control...) The effect is often connected to the product to suggest a message that is then turned up to eleven, such as a card game that makes people so enthused they forget to eat, or a rock band's music literally turning people into murderers. Whether this message remains reasonable outside of context, or even applies at all, varies.

Depending on how scary the evil is, and how familiar the product is to the kids in the audience, this can easily become Paranoia Fuel. Or, more often, Narm.