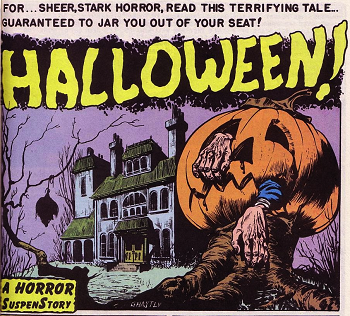 All Hallows' Eve. All Saints' Eve. Samhain. October 31. Whatever you call it — and whether you like it or not — Hallowe'en is a holiday that has pretty much ingrained itself into American (and, in turn, global) culture.

The roots of what we now know as Halloween are descended from the Celtic festival of Samhain (pronounced "sah-win"), which means "summers end." The ancient Celts believed that the "veil" between the worlds of the living and the dead was thin from the night of October 31st through to the night of November 1st; anybody who knows anything about Halloween knows where this is going. It was the Celtic new year, a time when spiritual power heightened, marking the last harvest, the end of foraging for livestock, and the beginning of winter. Samhain was then adapted into the night before the Catholic celebration of All Saints' Day (aka All Hallows' Day or Hallowmas), becoming "All Hallows' Evening", which was then contracted into "Hallowe'en". Originally, in the seventh century, All Saints' Day was celebrated on May 13th, right after Easter. A few centuries later, it was shifted to November, to incorporate Celtic Samhain traditions in an effort to convert pagans. Some Orthodox churches continue to celebrate it in April, as did the Irish for a time. The revival of Celtic culture in the late 19th and early 20th centuries only deepened interest in Samhain, contributing to its transformation into the modern holiday of Halloween.

Halloween was imported to the US and Canada in the 19th century, a time that saw substantial Irish and Scottish migration to the New World. Back in this time, Halloween in North America was more of a celebration of Irish and Scottish heritage than anything else, much like Columbus Day is for Italian Americans. It was celebrated with large feasts, apple bobbing, and other divination games, as well as pranks and mischief. By the turn of the century, the "pranks and mischief" had become the defining feature of Halloween, turning it into a night of hooliganism and vandalism. As a result, the Boy Scouts and neighborhood groups started working to turn Halloween back into a safe celebration, organizing trick-or-treating events based around the old practice of "guising" to redirect the focus of the festivities away from violence. With Halloween now becoming a popular celebration outside of Welsh, Irish and Scottish neighborhoods, retailers jumped at the opportunity for a new holiday to commercialize. While this commercialization first began in the early decades of the 20th century (mass-produced costumes started appearing in the 1930s), it really took off after World War II, and it hasn't stopped since.

Today, Halloween is considered a major holiday in the US, Canada, Mexico (where it retains more of a Catholic bent, as it falls right before the Día de los Muertos celebrations), and the British Isles (where it tends to be more strongly influenced by the older traditions). It has also caught on in mainland Europe (especially in those regions with a strong Celtic influence, such as northernmost Spain, where it is often also closer to the older traditions), India, the Philippines, and Japan through exposure to American media. It's that part about American media, however, that often creates the most criticism of Halloween outside North America and the British Isles. France, for instance, has long been resistant to celebrating the holiday, seeing it as a form of American cultural imperialism, and celebrations are largely limited to the expat communities. The Australians are more accepting, especially in recent years (it helps that many Australians claim Irish or Scottish ancestry), but it is still fairly controversial for the same reasons that it is in France; a typical sight in newspapers around October is articles railing against the holiday and the "creeping Americanism" it is held to represent (especially given that, in Australia, October marks the beginning of spring). Even in the UK, you can encounter quite a number of people who bemoan the degree to which Halloween has displaced the more traditional Guy Fawkes Night or Bonfire Night observances of a few days later.

Remember what we said up at the top of the page about how Halloween is (allegedly) descended from the Celtic pagan festival of Samhain? Well, there are some people and places that don't take too kindly to this little tidbit.

For the most part, Catholics and mainline Protestants are tolerant of the holiday, regarding any ties to paganism as having long since been buried by centuries of Christian and secular tradition. (After all, does anybody, apart from Jehovah's Witnesses and fundamentalist churches, complain about the connections between modern Christmas celebrations and the pagan solstice holiday of Yule?) To them, Halloween is seen as a harmless, secular event built around imaginary monsters and handing out candy. Catholic schools often hold Halloween celebrations, and a Vatican exorcist has said that the day is harmless. True, the Catholic and Anglican Churches may emphasize All Saints' Day, the celebration that comes after Halloween, while Protestants may celebrate Reformation Day — the day when in 1517, Martin Luther started The Protestant Reformation — which falls on the same day. However, these celebrations are usually held simultaneously with Halloween, rather than in opposition to it. The laissez-faire attitude that Catholics hold to the holiday makes sense — the Catholic Church was instrumental in Christianizing the holiday, and it was Irish Catholics who brought Halloween to America in the first place.

Some conservative Christians, however, maintain that Halloween trivializes (or outright celebrates) the occult and is therefore incompatible with the Christian faith. To bolster this stance they point to the holiday's Celtic pagan connections, which they feel to be Satanic. There have consequently been many religious challenges to and protests against the celebration of Halloween lodged over the years, particularly in the "Bible Belt" regions of the South and the rural Midwest. A recent tradition among many conservative Christians has been to hold "Halloween alternative parties" in which people dress up as Biblical characters, and to stage "Hell houses"

as The Moral Substitute to regular Halloween attractions. At Hell houses, the attendees are shown scenes meant to portray the decadence of secular culture, finally ending in a room that represents either heaven, which is the reward for not behaving in the manner just witnessed, or hell, which is occupied by Satan, who claims that all of the characters they have seen (who usually reappear here) are now firmly in his grasp. Afterwards, in order to get out, the attendees must agree to be "saved" (become born-again Christians) or traverse the length of the building. In some cases, the Hell house is marketed as a normal haunted house, thus making it a Bait-and-Switch in which unwitting attendees don't realize that they're going to a fire-and-brimstone sermon until they're already through the door.

The same dichotomy exists within Judaism and Islam. The Orthodox Jewish and conservative Muslim views on the holiday are similar to the conservative Christian one — it has deep pagan roots, and is therefore incompatible with observance of Judaism or Islam. It is for this reason that celebrations of Halloween have failed to gain traction in the conservative Middle East—including Israel.note Although to be fair, Jews already have Purim, which has become almost exactly the same thing, except that Purim has no real "spooky/scary" elements to it, all adults--not just young'uns--are supposed to get drunk, and the people in costumes going door to door asking for free stuff are probably plastered young men, not adorable little kids. On the other hand, Reform Jews and the more secular and liberal Muslimsnote They do exist, and there are in fact quite a lot of them in the US and Canada tend to follow the more "who cares" view of their liberal Christian counterparts, holding it to be harmless fun that lost any semblance of being any religion's holiday once the marketers got a hold of it. Meanwhile, the Conservative Jews (as usual) stand half-here, half-there on the subject.

And finally, with so much controversy over its pagan history, what do actual pagans think about it? Celtic pagans (of both the neo-pagan and reconstructionist variety) consider the season to be a holy time of year, and make offerings to the gods and the ancestors. A fair number of Wiccans, however, feel that the modern, Western incarnation of the holiday is offensive — they see it as promoting old stereotypes and caricatures of "wicked witches" that serve to make people suspicious and fearful of real-life pagans and witches. (The Boston Legal episode "Witches of Mass Destruction" featured conservative Christians and hardline Wiccans teaming up against Halloween, which is sad.)