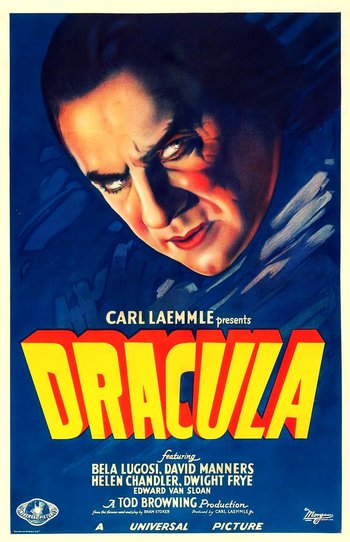 A Universal Horror film from 1931, which made Bela Lugosi world-famous as the Classical Movie Vampire. His portrayal of Dracula is the one that most people think of when they hear the character's name (or even just the word "vampire"), whether or not they've actually seen the movie.

Being bored with Transylvania, Count Dracula (Lugosi) decides to move to London for some fresh blood. After making the preliminary arrangements with the English solicitor Renfield (Dwight Frye), Dracula makes him his thrall and travels to England by sea, killing the crew of his ship in the process. When he finally arrives in London, he turns Carfax Abbey (the property he bought with Renfield's help) into his base of operations. He then takes special interest in Mina Seward (Helen Chandler), who lives at the neighboring sanitarium owned by her father, Dr. Seward (Herbert Bunston), and is engaged to John Harker (David Manners). As victims turn up and Mina begins to act strangely, Professor Van Helsing (Edward Van Sloan) comes to help...

The film was originally planned to be a high-budget adaptation of Bram Stoker's original novel, but due to The Great Depression, it was instead adapted from a popular stage play of the time (written by Hamilton Deane and John L. Balderston, and starring Lugosi in its Broadway production) on a fairly low budget. However, the producers did manage to collect enough money to film some of the early Transylvania scenes. Tod Browning, who had proven himself in the vampire genre with London After Midnight some years prior, directed the film. Several elements of that film reappear in Dracula, such as the armadillos and the look of the female vampires.

A Spanish-language version, Drácula, was shot at night on the same sets with different actors; it's often claimed to be the superior film (mostly for its cinematography, pacing, and atmosphere), lacking only an actor of Lugosi's magnetism playing the Count. Instead it was Carlos Villarías playing Dracula, with Lupita Tovar as "Eva" rather than Mina. Barry Norton plays "Juan" Harker. George Melford directed. Both the Browning and the Melford versions of Dracula are in the National Film Registry, the Anglo version having been inducted in 2000 and the Spanish version in 2015.

In 1936, it was followed by a direct sequel entitled Dracula's Daughter.

For the 1958 Hammer Horror adaptation go to Horror of Dracula.

It is one of many films included in the "Universal Horror" canon.