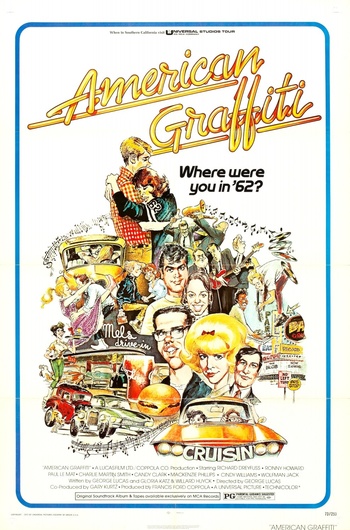 Where were you in '62?
"The whole strip is shrinkin'. Ah, you know, I remember about five years ago, it'd take you a couple of hours and a tank full of gas just to make one circuit. It was really somethin'."
— John Milner, being nostalgic in an already nostalgic movie
Advertisement:

American Graffiti is a 1973 coming-of-age comedy-drama film directed by George Lucas, based on his memories of growing up in the late 1950s and early '60s—and thereby managing to cram in as much of that era's Popular History as possible. (He was, of course, one of the first to do this.) Lucas's friend and fellow filmmaker Francis Ford Coppola, who was just coming off his own success directing The Godfather, produced the film along with Gary Kurtz.

Set in small-town California in 1962, the film follows several teenagers as they spend their last night of summer vacation goofing around, getting into trouble, contemplating their futures, and listening to Nothing but Hits. No, there really is no plot. Get over it.

A huge (and unexpected) hit for Universal, American Graffiti established Lucas's box-office bona fides, kicked the already-existing '50s nostalgia boom of the '70s into high gear, and provided the template for countless teen comedies to follow. The film is also notable for its Ensemble Cast of soon-to-be-well-known young actors, including Richard Dreyfuss, Ron Howard,note Howard was actually the best-known one at the time of filming, having already been a child star and a regular on The Andy Griffith Show Paul Le Mat, Charles Martin Smith, Cindy Williams, Mackenzie Phillips, Suzanne Somers, Harrison Ford, Kathleen Quinlan, and Joe Spano. Also featured is famous radio disc jockey Wolfman Jack playing a version of himself.

The movie has a lesser-known sequel, 1979's More American Graffiti, which was set in The '60s and according to Lucas "made all of ten cents".