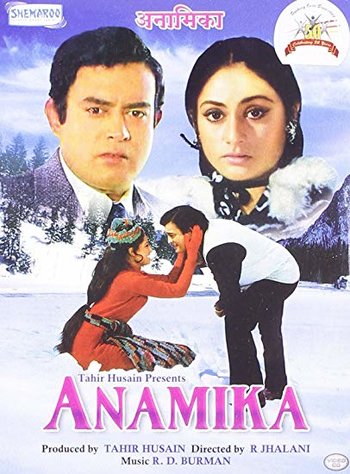 Devendra (Sanjeev Kumar) is a writer and poet, who hates women due to a seriously unpleasant breakup in his past. When a mysterious woman wanders out in front of his American-made Cool Car, he very grudgingly takes her home...only to completely freak out when she claims she's his wife. His kindly uncle and the police both think that she has Identity Amnesia but Devendra thinks that she is a con artist Faking Amnesia for a Wounded Gazelle Gambit. But everyone insists that he take her in and treat her decently, so he (very very grudgingly) does. Over time, he becomes attracted to the warmth and optimism of this mysterious woman, whom he calls Anamika (which means "unnamed" in Sanskrit, but has a subtext of "without a destiny" or "one who makes her own destiny"). Meanwhile, people occasionally stalk and attack her, and he has to protect her. He continues to investigate her background, with increasingly unpleasant results, until the point where it really looks like she's a former prostitute and a con artist, and is definitely Faking Amnesia. But once again, is Anamika truly what she seems?

The romance/thriller Anamika was a fairly major hit in its time and one of the songs was quoted in Kal Ho Naa Ho.