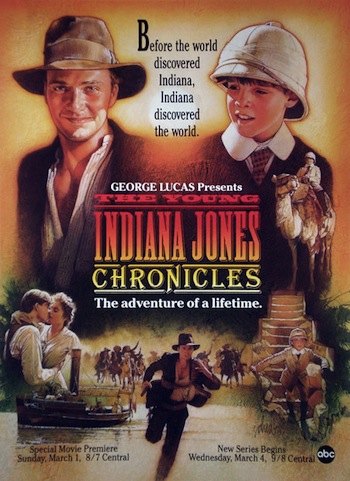 A television series featuring the adventures of the silver-screen archaeologist Indiana Jones in his childhood and teen years, wherein he had a remarkable tendency to keep encountering famous people and events. The series was conceived and produced by the films' co-creator George Lucas, who drafted a 70-item timeline of interesting moments in Indy's young life for writers to take story ideas from. The concept was inspired by the first act of the popular Indiana Jones and the Last Crusade, which depicted Indiana as a teenager.

It originally aired from 1992 to 1993, taking the form of hour-long episodes, as The Young Indiana Jones Chronicles. The series principally showcased Indy at the ages of 9-10 (as played by Corey Carrier) and 16-up (as played by Sean Patrick Flanery). The Carrier episodes focus on Indy touring the globe alongside his parents as part of a world lecture tour given by his father, a noted medieval scholar. The Flanery episodes primarily deal with Indy's service in World War I, in just about every theater you can think of. In each episode, Indy would meet some famous person from the early 20th century, and learn some sort of moral lesson. Yes, Lucas very openly envisioned the series as edutainment.

Notably, the show aired in an extremely Anachronic Order, with Carrier's and Flanery's episodes often alternating. This may have hurt the series in the long run. The writers produced scripts for three seasons' worth of episodes, including some stories that would introduce more characters from the films. However, the show was cancelled after its second season, before those episodes could be shot. Nonetheless, four additional TV movies were later broadcast from 1994 to 1996, which incorporated some material from the various unproduced scripts (though not from the ones which featured more of the films' characters, sadly).

George Lucas prided Young Indy on managing a film-level quality production on a television budget, helped by revolutions in digital technology, and he has said that the show was partly a test to see how far he could take the later Star Wars prequels. Also like Star Wars, the series was subject to subsequent furious re-editing by Lucas, the new cuts first showing up during re-airings in the late 90s.

This re-cut version, with new footage added and other parts removed, is the only one currently available on DVD: it's known as The Adventures of Young Indiana Jones. The Adventures combines the original Chronicles episodes into two-hour tele-movies, two shows per film (often in a quite different, and much more strictly chronological, order than in the original airings). Again, some of the newly shot material was based on the unfilmed Chronicles scripts. In keeping with the show's semi-educational nature the DVDs also feature numerous well-researched half-hour documentaries, which place the historical personages and events of the various episodes in context.

A notable proportion of Indy fans, regardless of their opinions of the series as a whole, refuse to accept the Chronicles Framing Device, which depicts Indy as a one-eyed, possibly-senile nonagenarian (played by George Hall), pottering around suburbia and boring people with reminisces of his Glory Days. It may or may not be significant that the Old Indy sequences were the first thing to be thrown out of the Adventures release, although his hand can be glimpsed closing Indy's diary at the end of the closing titles. One special feature-length broadcast of the original series, however, featured Harrison Ford playing a late middle-aged Indy in its framing device; this scene is itself problematic as it contradicts some of what was seen more than a decade later when Ford next played the role in Indiana Jones and the Kingdom of the Crystal Skull.