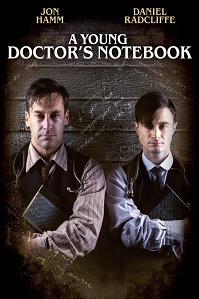 A British dark comedy starring Daniel Radcliffe and Jon Hamm, originally broadcast on Sky Arts. Based on the semiautobigraphical short story collection of the same name by Mikhail Bulgakov.

Set in Russia in the 1910's and 1930's it is the story of the young Dr. Vladimir "Nika" Bomgard, with nearly perfect scores from his medical college being given his first assignment, a hospital in the middle of nowhere Russia. There he deals with his own staff, syphilis, the shadow of the former doctor, more syphilis, Bolsheviks, white star nobles, syphilis, very dumb peasants, pickled sprats, morphine addiction, syphilis, and the huge mortality rates of the Russian people.