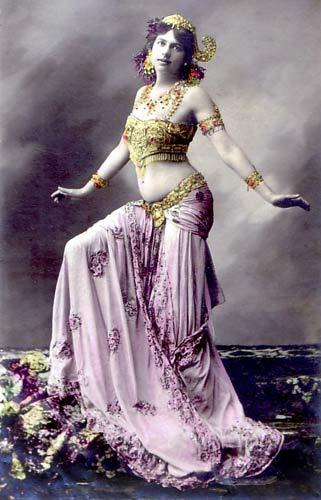 Mata Hari (7 August 1876 – 15 October 1917), born Margaretha Geertruida Zelle, was a Dutch spy and the most iconic example of a Femme Fatale Spy ever.

Born in Leeuwarden, at age fourteen her mother died and her father went bankrupt. She went to an all girls' school and after a still-unclarified incident with her teachernote Either she seduced him or he seduced her she was suspended from school. After leaving school she fell in love with a military colonial, Rudolf MacLeod who worked in Indonesia, then a Dutch colony. In 1895 they married and moved to Indonesia, which allowed her to receive financial stability and notability among rich military officers, whom she fancied more than other men. Their son and daughter were born in this country, but the son died due to poisoning. Her husband blamed her for not keeping a better eye on the boy and when they moved back to the Netherlands they divorced.

In 1905 she went to Paris and started a new life as an exotic dancer in salons. She called herself Mata Hari (translation: "Eye Of Dawn" in Malay language, and one of many names for The Sun) and combined her so-called Indonesian ritual dances with striptease acts. A long series of performances and affairs with rich officers followed. She became a local celebrity, toured around many European cities but when World War I broke out the bank froze her money because she was a foreigner. As a result she went back to her native country broke, disgraced and unhappy. She moved in with an old lover who had enough money to help her survive. Still she missed her old luxury life and moved back to Paris. As she did before she began performing again and having affairs with officers. The French intelligence service thought she might be useful to gain secret information from these officers and thus they asked her to spy for them. She agreed but, contrary to legend, most info she provided them was useless, because they had already found these things out. Many sources describe her as a naïve and gullible woman, living in a self-created fantasy world where she imagined herself to actually be the Indonesian exotic dancer she claimed to be in her acts. She did have Hidden Depths though: she spoke five languages: Dutch, German, French, English and Malay (Bahasa Indonesia wasn't invented yet).

In 1917 she was arrested by the French authorities under suspicion of being a double agent both for them as well as the Germans. There was no proof, except a German officer referring to her under a code name in a letter. It is now thought that the Germans deliberately used her to put the French on the wrong tracknote Documents declassified long after her death suggest that she really was a double agent, but the intelligence she provided the Germans wasn't any more valuable than that which she provided to the French - mostly gossip about the love lives of government officials - and that the Germans leaked her double agent status to the French themselves to get rid of her. She was eventually Court-Martialed in a trial with a foregone conclusion. Her defense attorney, veteran international lawyer Edouard Clunet, faced impossible odds: he was denied permission either to cross-examine the prosecution's witnesses or to examine his own witnesses directly. Thus she was sentenced for high treason and Shot at Dawn. An issue of The New Yorker claimed that she was made to wear "a neat Amazonian tailored suit, especially made for the occasion, and a pair of new white gloves", but another account claimed that she wore the same low-cut blouse and tricorn hat ensemble which had been picked out by her accusers for her to wear at trial. However, neither account is consistent with the photographic evidence, and are likely false, especially considering that another myth claims she blew a kiss to the firing squad before the order to shoot was given. Not to mention the even less believable Urban Legend that she attempted stripping when she was in front of the firing squad for her execution, apparently on the belief that no one could shoot a body like hers. It didn't work, but it's not like she had a better option at that point.

After her death Mata Hari became a legend. Several books, novels, comics, cartoons and films have been devoted to her, many depicting her as a Femme Fatale Spy far more beautiful, intelligent, and seductive than she actually was in Real Life. Her tragic love life and self-created Indonesian origin story have also been subject to a lot of romanticization and Fanservice fantasies. She is one of the most iconic sex symbols of the 20th century and has been portrayed on screen by Greta Garbo, Marlene Dietrich, Jeanne Moreau and Sylvia Kristel. Despite all that, her importance (not to mention competence) as a spy was greatly exaggerated. For a more successful Real Life example of this trope, Josephine Baker would be a much better choice. Or as a Spear Counterpart, Roald Dahl.

Her trial has also been the subject of many documentaries trying to uncover whether she was guilty or not. Up until the 1960s many believed the verdict to be true, but new research since then has cast more doubt over these accusations. Whatever the case she will likely remain a Historical Domain Character that will keep on inspiring many more expy Femme Fatale Spy stories to come.

For the film based on her life, see Mata Hari.