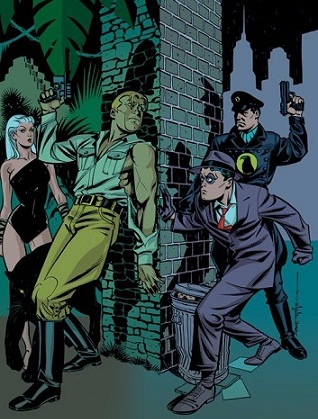 So a Jungle Girl, a Super-Scientist, a Masked Vigilante and an Ace Pilot walk into a bar...
Advertisement:

Once upon a time, there was pulp. Pulp was a style of writing that emerged onto the scene in the 1920s, featuring a variety of stories printed on cheap paper (hence "pulp"). Back in the day, pulp content ranged from the Cosmic Horror Stories of H. P. Lovecraft to the noir pieces of Raymond Chandler and from the over-the-top action of Doc Savage to the Heroic Fantasy of Conan the Barbarian and even the Raygun Gothic of Hugo Gernsback's Amazing Stories. The pulp era died down by the late '50s, when the leading distributor of pulp, the American News Company, went bankrupt, although there was a resurgence in the '60s and '70s in the form of the Darker and Edgier "men's adventure magazines", which straddled the line between pure pulp adventure and ostensibly-true Lurid Tales of Doom, all with a Rated M for Manly aesthetic. These are today best-remembered as things to read at the barber shop while you waited for your turn.

Then, people started looking back on the pulp era nostalgically, and when they did, they usually locked onto the over-the-top stories of Proto-Superhero characters like The Shadow, Doc Savage, and The Phantom. Many point to Raiders of the Lost Ark and the sequel Indiana Jones movies, which took 1930s pulp adventures as an inspiration, as the keystone of the pulp resurgence, but whatever kicked it off, pulp has recaptured the heart of many a geek.

Two-Fisted Tales refers to stories told in a style that reflects fondly on the old pulps. This usually means the story will be set in the '20s or '30s, and focus on square-jawed, clever men (and women) of action. Other elements thrown in for flavor include:

As stated above, Two-Fisted Tales don't often attempt to recapture the varied feel of all the old pulps; it's very rare you'll see someone trying to overlay the Doc Savage feel onto a Cthulhu story (not that it's impossible). Usually, it attempts to focus on the thrilling heroics, not that that's a bad thing.

While most works in the genre are not set during the interwar "pulp era" (though the occasional one, such as The Treasure of the Sierra Madre [1948], is), The Western could be considered an inherently pulpy genre, thanks to it frequently featuring heightened reality, an exotic historical setting (often nostalgically rendered), double-fisted machismo, a sensationalistic tone, plenty of action and/or adventure, print-the-legend storytelling, larger-than-life mythmaking, and fairly clear lines of morality.

Related to Diesel Punk and Jungle Opera. Often the subject of a Genre Throwback. See also Ninja Pirate Zombie Robot, Twice-Told Tale which requires a specific tale. Also see Sword and Sorcery for a similiarly campy style of adventure narrative that was popular around the same time.