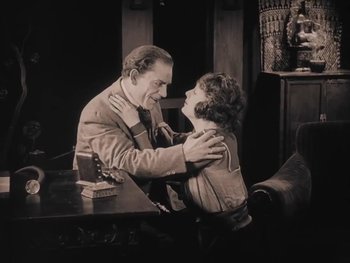 The Penalty is a 1920 film directed by Wallace Worsley, starring Lon Chaney.

A teenaged boy is injured when he's struck by a car. The emergency physician whisked to the scene, one Dr. Ferris, amputates both of the boy's broken legs. The second doctor called to the sickroom tells Dr. Ferris that the amputation was unnecessary and the boy's legs could have been saved. The older doctor agrees to help cover up Dr. Ferris' bungling, but not before the boy comes out of his anesthesia and realizes what Ferris did to him.

Fast forward 27 years. The young double amputee now goes by the name of Blizzard (Lon Chaney) and is a lord of organized crime in San Francisco. Blizzard's rackets include prostitution and heroin, but San Francisco police have noticed some odd activity. Blizzard has pulled his whores off the street and has set them to work making—hats. Bewildered, the cops send Rose, an attractive secret agent, on an infiltration into Blizzard's crime ring.

Meanwhile, Dr. Ferris escaped any responsibility for maiming Blizzard, and is a prosperous physician. His assistant, young Dr. Allen, is courting Ferris's daughter Barbara. Barbara is a sculptor, but Ferris and Allen, both being 1920-style sexist pigs, are irritated by her maintaining a career and think she should quit to marry Allen. Blizzard finds out about Barbara and wrangles himself a job as a model for a statue of Satan that she is sculpting. He has a plot for revenge against Dr. Ferris that ties into a much larger criminal plot.

Star-Making Role for Chaney, who would play similar freaks, weirdos, and criminals until his premature death from cancer in 1930.