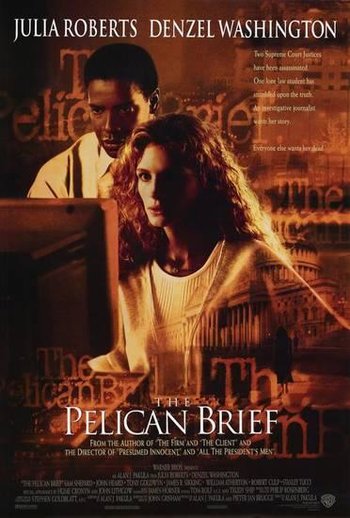 The Pelican Brief is a 1993 thriller film directed by Alan J. Pakula, starring Julia Roberts and Denzel Washington. It is based on the John Grisham novel published the year before.

The film is about a law student named Darby Shaw (Roberts) who writes a speculative brief regarding the assassinations of two Supreme Court justices. After showing it to her mentor/lover and his friend, they end up getting killed and she goes on the run. Darby seeks help from a newspaper reporter named Gray Grantham (Washington), and together the two set out to prove the brief correct.

Tropes seen in this film include: