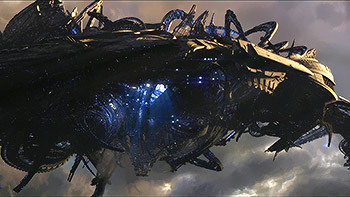 The spaceship equivalent of a guy wearing a black hat and twirling his mustache. Or, rather, one thousand razor-sharp metallic mustaches twirling all at once with the energy of a thousand suns glowing beneath its armored plates.

. With advancing technology — especially in Computer-Generated Images — TV and movie spaceships became increasingly complicated as programmers could animate smaller and smaller individual segments. This has caused an explosion in the number of sharp edges and non-functional moving parts assigned to antagonist spaceship designs, to the point where most people in fiction powerful enough to threaten a planet are seen flying around in giant metal squids with a hundred vicious claws and blades on every tentacle.

The interiors of these ships are usually as dark and shadowy as the exterior, with huge docking bays, long corridors and plummeting shafts. Between those plummeting shafts, all the sharp edges and any actual defense systems within, they also almost-invariably suffer from No OSHA Compliance.

As a general rule, the spaceships become more squid/octopus-like as they grow in size and in the number of spikes and blades they possess. Often they possess a Wave-Motion Gun, and for extra points, the ship has to radically and slowly transform its shape just to use it, giving the heroes enough time to disarm the superweapon.

If a ship is simply covered in Spikes of Villainy, it's technically not this trope. This is about when enemy spaceships go way overboard on the sharp edges to impractical levels. How does a pilot climb inside such a ship without tearing their pressure suit? How could it be air-tight with all those shifting parts and gaps in the hull? And then there's the issue of dead weight, which is the last thing a real spaceship needs if it's going to go anywhere.