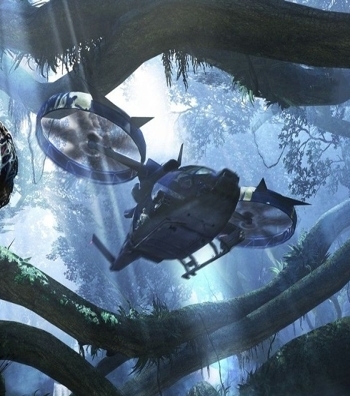 You're in an unspecified future, and you need an aircraft capable of short or vertical takeoffs. Helicopters are so 20th century: they can't do all that fancy supercruising and barrel rolls that jets can do and they (probably) can't survive being dropped from orbit because well, hey, you might just need to be dropped from orbit. So you don't want a helicopter, but you also don't want anything as conventional looking as a VTOL airplane, either.

What you need is a futurecopter. These machines come in a variety of sizes, ranging from dinky sized models about the size of an RC toy, a one-man unit (with optional handholds on the sides for external passengers), through unmanned autonomous versions (best steer well clear of these) the size of a Hummer, right up to beasts the size of a civil cruiser capable of transporting dozens of fully armed troops complete with an airlifted Awesome Personnel Carrier or a Cool Tank. Size and operation aside, what they almost invariably have is ducted fans or tilting jet engines (either one or two pairs, one on each side of the fuselage, and usually independently tiltable) for lift and thrust and stubby, vestigial wings with an assortment of guns, missiles and bombs, if there were any wings at all. And, in compliance to the all-powerful Rule of Cool, you can expect the aircraft to be as fast as a jet, as agile as a helicopter and as armed as a fighter-bomber. The pilot, if present, is invariably right up front in what looks like a conventional helicopter gunship cockpit.

These aircraft aren't always a major element of the stories they appear in—they're just as likely to be background details, put in to add a "futuristic" atmosphere. Just as airships are often used as a shorthand for alternate-history settings, ducted fan aircraft often serve as a visual cue for a setting that's futuristic, but not entirely far removed from our own. As the stereotypical "futuristic aircraft" of today, it could also be considered the successor trope to the Flying Car—and indeed, many fictional Futurecopters are used more or less like airborne cars.

was a purely experimental aircraft not intended for mass production. More are being developed, however, with many

approaching production status, which could potentially make this Truth in Television in the near future. One might also, with some imagination, consider existing tilt-rotor aircraft like the V-22 Osprey to be a very primitive version of this idea, although its rotors/propellers are firmly locked together and very much not ducted, and it has big, conventional wings. Some of the contenders for the US Army's Future Vertical Lift program have taken tentative

The Atreides' forces move to Arrakeen in their Ornithopters. Aircraft that fly by flapping its wings like a dragonfly, taking the place of helicopters in the far future.

The Atreides' forces move to Arrakeen in their Ornithopters. Aircraft that fly by flapping its wings like a dragonfly, taking the place of helicopters in the far future.