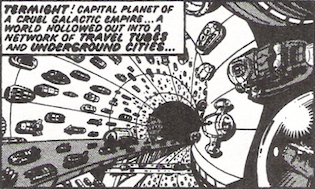 The Interstate is a series of tubes!
Advertisement:

In The Future, driving long distances in a car is going to be a very different experience.

This trope is about how automobile traffic is affected by technological and societal progression in high-tech future settings. Namely, as cities become big enough to rival the size of modern-day countries or even encompass an entire planet, general populations tend to increase as well as the number of people with cars looking to go places with them.

Likewise, road vehicles tend to change with the times, too. Most futuristic vehicles will be able to reach average speeds of upwards of 200 km/h or 120 mph, and futuristic freight trucks tend to be more than twice their normal sizes by today's standards. A lot of wheeled vehicles may also come with an AI computer on board that can drive the car by itself. Lastly, it goes without saying that a lot of future cars will also fly.

With all of these new changes, it only makes sense that highways and major roadways and traffic patterns change with them. Usually, the most noticeable difference that can be observed almost immediately tends to be how mass-transit roads tend to be a lot wider to accommodate for the increased traffic in the future society; very wide highways with more than 8 lanes to accommodate for two-way travel are not uncommon. Other advancements tend to incorporate magnets and magnetism in various ways to aid in a future car's ability to drive itself, maintain safe distances from other cars to prevent accidents, and/or allow cars to do impossible things like drive upside-down or vertically up walls.

Naturally, for Flying Cars, air-travel routes are specifically designed just for them, much like how there are for airplanes in the modern day. In more urban environments, travel routes for flying cars may be stacked on top of each other to allow access to and from different locations found at different altitudes throughout a future city.

Typically showcased a great deal in Chase Scenes in a future setting where they may double as Scenery Porn, they tend to actually function without there being many problems. There never tend to be many traffic jams, and even when there may be a disastrous motor accident or immense pileup on such roads, they very commonly always benefit from a Snap Back, especially in serial adventure stories where any major road disasters in one installment never hinder characters traveling along them in episodes immediately following it (and even when it would seem like a very difficult thing to fix with most vehicles traveling at speeds faster than it may conceivably take emergency services to arrive, cordon off an accident, and properly redirect traffic).

A highway for flying cars in the "future" year of 2015

A highway for flying cars in the "future" year of 2015