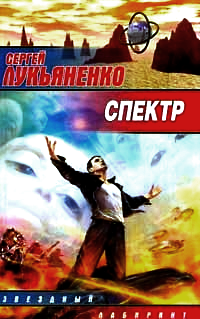 Original cover
Spectrum (Спектр, Spektr) is a 2002 science-fiction novel from the popular Russian sci-fi and fantasy author Sergey Lukyanenko. The novel is set Next Sunday A.D. Several years before the events of the novel, aliens who call themselves Keymasters arrive in giant black ships and offer to add Earth to their Portal Network by growing Gates in key cities. The world governments agree, but the Keymasters impose several conditions, including a requirement that no government attempt to prevent an individual from seeking passage through a Gate. As a form of payment, the Keymasters listen to stories told by those seeking passage. If the stories are interesting and original, they allow the individual to pass. Within the Gate, the person uses an interface designed by each species to select the destination planet and Gate. For the humans, the Keymasters use a Windows-based system and an ordinary keyboard-and-mouse interface.
Advertisement:

The protagonist of the novel is a denizen of Moscow named Martin Doogin, a private investigator specializing in cases involving other planets. He has a rare gift to make up interesting and original stories on the spot, which allows him frequent passage through the Gates. Those who know him call him the Walker. One day, a rich client arrives to his office and asks him to find and return his daughter Irina, who has gone off-world. Martin quickly figures she wants to be an Adventurer Archaeologist and finds her on the planet Library, called so because it's covered by mysterious ruins inscribed with symbols no one has been able to decipher. However, just as he finds her, Irina dies in a freak accident (a normally docile alien animal attacks her). Before dying, she gives him the name of another planet. Curious, he goes to that world and discovers another Irina who is alive and well... that is, until she once again dies in a series of unrelated events. He soon finds that there are a number of copies of the girl on different worlds, but each one he finds ends up dying. Later he is told the Gate has split Irina into multiple copies with a Hive Mind of sorts. How? Why, because of Windows, of course. She selected multiple worlds on the screen using the standard Windows Ctrl+click function and hit Enter, expecting the software to randomize her choice. As told by another character, who had something similar happen to him, the Universe does not tolerate doubles and eliminates them through freak events straight out of Final Destination.

Martin is frequently contacted by a Russian FSB officer, who is finally allowed to reveal that Irina's father is their freelance analyst, who recently compiled a classified report with a list of unusual planets that may help reveal Keymaster's past and goal. Of course, Irina uses that list.

With the list he tracks yet another Irina to Bezzar, a planet where people can walk on water due to the extremely-high surface tension (however, spending more than a day on the planet without special equipment is fatal to offworlders). Irina is working with the Bezzarians, a race of man-sized amoebae, on a way to get to the Keymasters' homeworld in order to find out the truth about an ancient cataclysm that destroyed the old galactic community. The Bezzarians build a ship capable of "riding" the wave used by the Gates to link with one another. They jump to what they assume is the Keymasters' home system. When Martin realizes that the Bezzarians intend hostile action, he kills them with his gun (the bullets just pass through, but the heat caused by the friction turns them insane). Just before the Keymasters' black ships arrive to capture the intruders, Irina demands that the pilot kill her to avoid capture, which it does. Martin is captured by returned to Earth. He contacts Irina's father and explains the situation. Not only does the man tell Martin to stop looking, he also pays him the promised amount multiplied by the number of Irinas he found (Martin did put in the effort, after all), before going home to mourn and hope at least one Irina survives.

Still, there's two Irinas left, and Martin continues. In a Breather Episode on Sheali he compares notes with Irina and starts to understand the Keymasters' grand design, but Irina finds yet another way to die. Then he tracks her down to a strange planet called Talisman, covered by a perpetual fog that transforms its star's light into electricity that is absorbed into the ground and powers the constant synthesis and destruction of matter in boxes called "safes". The planet is full of "prospectors" who claim a number of safes and periodically open them to see if anything valuable has been synthesized. Irina is looking for a way to jump-start the next step in human evolution. In the end, it's Martin who figures out how to generate the so-called "detonator", but they are attacked by Aranks who want the secret for themselves. At the moment of choice, Martin chooses to revive Irina (who jumps off a cliff, so that the Aranks can't use her as a hostage) and safely return home. After explaining what he has learned about the planet and the past to a Keymaster (in the form of a story, of course), Martin is told that he no longer needs to tell stories to pass through the Gates. Martin shrugs and tells him that he's used to paying for passage. Martin and Irina return to Earth.