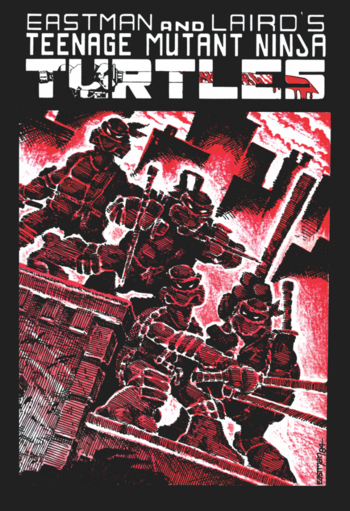 "Turtles, as god intended them."
"We strike hard and fade away into the night."
— Leonardo in Issue 1
Advertisement:

The original incarnation of Eastman and Laird's Teenage Mutant Ninja Turtles, and the one that lit the firecracker. The first issue appeared in May 1984.

After the unexpected success of their first issue, Kevin Eastman and Peter Laird continued expanding their universe in a somewhat haphazard manner, both in the regular series and complementary books such as Tales of the TMNT and various one-shots and specials. Over time, an overall arc emerged, dealing with the turtles' enmity with the Foot, which is at the heart of the book's four major stories: the initial issue, which featured the Shredder's death; a two-parter which featured his return and the turtles' exile from New York; "Return to New York", in which the Shredder is killed off for real, and "City at War", which dealt with the aftermath. In between those stories, the book would focus on mostly stand-alone stories created either by Mirage employees themselves or guest creators. These stories would fluctuate wildly in tone and content. Several, particularly those by guest creators, now have dubious canonicity. This first series concluded with the aforementioned "City at War", which ended the Foot/Turtle conflict, introduced regular characters Karai and Shadow, and is considered by many to be the definitive TMNT story.

Soon after, a second incarnation of Teenage Mutant Ninja Turtles was born, written and drawn by long-time Mirage employee Jim Lawson, and, unlike the first volume, in full color. This second series featured the return of Baxter Stockman and Nobody, introduced government organization D.A.R.P.A., and Mr. Braunze, the mysterious man with psychic powers living in April's apartment building. However, the series proved short-lived, folding after only 13 issues.

The book was soon revived under a third volume, published by Image Comics as the official continuation of the Mirage continuity. It is mostly remembered for mutilating three out of the four turtles: Raph lost an eye and got various facial scarring; Leo lost a hand; and Don was so badly hurt he was forced to become a cyborg. Other notable events include Splinter's transformation into a bat-like creature; the introduction of Pimiko, a female ninja who was eventually revealed to be the Shredder's daughter; and the expansion of Shredder mantle to a full-blown legacy, with both Raphael and an unknown female (Karai, according to Word of God after the fact) taking on the identity. The series ended inconclusively with cancellation, and although it was subsequently removed from canon, nods to it would appear once in a while. It also saw two attempts at a proper ending - first a fan-made attempt in 2012 working from notes provided by the original team, and again in 2020, when the entire series was reprinted as "TMNT: Urban Legends", and original creative team Gary Carlson and Frank Fosco returned to publish three new, final issues, which wrapped up the story and (more or less) lined it up with later continuity.

The year 2001 saw yet another version of the book, this time helmed by turtles co-creator Peter Laird. Fifteen years after the events of volume 2, the turtles have now returned to the sewers, Casey and April are now married, and Splinter lives in Northampton with Shadow, who is now a teenager. The Utroms have announced their existence to humanity and have opened Earth up to interstellar trade, meaning that the turtles can now live in the open. It has proven controversial, thanks in part to plots such as the death of Splinter and the revelation that April was not actually born, but rather a drawing come to life.

Midway through its run, the book was joined by a second incarnation of Tales of the TMNT, this time as an anthology book telling stories set through the turtles' lives, told by a variety of writers and artists.

In 2006, the regular Teenage Mutant Ninja Turtles book ceased regular publication, thanks to Peter Laird's other duties, creative burn-out and the economic disincentives of publishing a money-losing book. While new issues are still being released once in a blue moon, Tales became the de facto main book until the series' cancellation and the sale of the TMNT property to Nickelodeon.

IDW Publishing (who has published other licensed Comic Books) has gained the rights for publishing Ninja Turtles comics, which include reprinting this series, though Mirage retains the rights to publish up to 18 new issues a year. This has made finding it easier than it ever was, so check them out if you're interested.

See also: Teenage Mutant Ninja Turtles for information on the franchise in general.