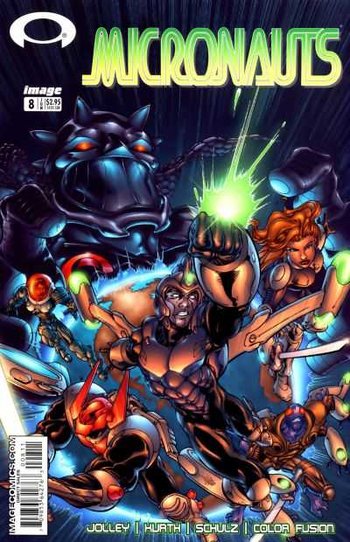 In 2002, Image Comics obtained the comic book license to the Micronauts toyline from rights holder Abrams Gentile Entertainment and produced a comic book series set in a different continuity from the Marvel Comics series.

The main series was made by Devil's Due Publishing back when it was still a subsidiary of Image and lasted 11 issues, with the premise of a young man named Ryan Archer being transported into the Microcosm and having to lead some freedom fighters in standing up to Baron Karza and ending the cruel tyrant's reign.

There was also a miniseries detailing the origins of Baron Karza and a short-lived continuation that Devil's Due Publishing published independently of Image that only lasted three issues.

It wasn't until 2016 that yet another Micronauts comic would be published. For information on that comic, see Micronauts (IDW).