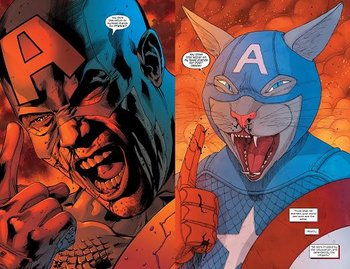 Left: The Ultimates at their prime with one of their biggest drama bombs.
Right: The Ultimate Marvel line is about to get closed, so what the hell, bring in the Ultimate Spider-Ham and his troupe.note Image from Ultimate FF #5.
Advertisement:

So you're following this story. So far, it's a very dark and edgy, tight and gripping thriller. Three main characters have died, the fourth is having an abortion in order to prevent the evil conspiracy from using her child to bring forth the apocalypse in a Crapsack World. Nobody smiles, ever.

Then you tune in next week, and find out that... the three dead guys have been resurrected thanks to the powers of a Magical Girl Bunny-Ears Lawyer who takes the form of a polkadot unicorn. The evil government conspiracy is actually a sham by The Man Behind the Curtain, a demonic dog from hell who speaks entirely in Pig Latin and just wants to impress chicks. The heroine's pregnancy was just a hallucination brought on by overcooked chocolate-chip cookies (and she's fine now). There's No Fourth Wall any more, and the characters have a degree of Medium Awareness. Everyone always smiles.

This Tone Shift away from seriousness and more towards humor can happen for any number of reasons. Maybe audiences weren't jiving with the more serious take. Maybe there was some Executive Meddling involved. Maybe the writers were just bored. In some cases, the story started funny, became serious, but then returned to its roots. And if it runs long enough, it may go serious again.

If done badly (or at all) it can piss audiences off- after all, True Art Is Angsty.

If this way happened to the actors in Real Life, that's Leslie Nielsen Syndrome.

Inverse of Cerebus Syndrome, can be combined to get Cerebus Rollercoaster. Compare Lighter and Softer. See also Denser and Wackier when a series gets less realistic and zanier as it goes on. An instance of Mood Whiplash.