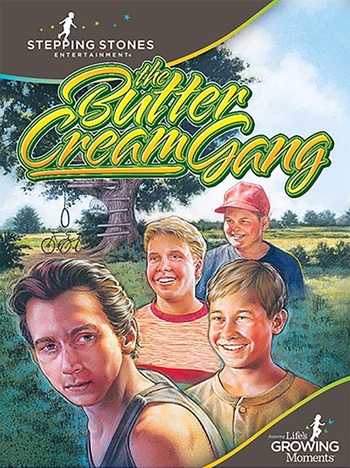 The ButterCream Gang is a 1992 direct-to-video movie, distributed by an independent producer known as Feature Films For Families.

The titular gang started in the 1800s, when young men would help local Civil War widows do household tasks (such as churning butter - hence the name) and has continued into the present day. At the time of the movie, the club consists of Scott, Lenny, Eldon, and Pete who carry on the gang's tradition of helping those in need.

Trouble starts, however, when Pete moves to Chicago and becomes a member of a street gang. He moves back home and spends his time shoplifting, picking on kids, spraying walls with smiley face graffiti, and throwing rocks at bottles on train tracks.

Can Scott, Lanny, and Eldon turn Pete back into a good boy?

The movie mainly focuses on how Scott and Pete's friendship crumbles, and Scott basically going through hell trying to rebuild it. Lenny and Eldon provide some support, but they quickly become disillusioned and are more interested going forward without Pete than in redeeming him. The writers were likely intending to present us with an idealized, cheesy setting and then inject it with a harsh dose of reality. Most people who have seen it, however, would probably say that, whether-or-not the writers succeeded, it still stays cheesy all the way through.

It was followed up by a (once again, Direct-to-Video) sequel, The ButterCream Gang in Secret of Treasure Mountain, which details Eldon discovering gold in a mountain. While the first movie had a somewhat complicated aesop about bad influences and having to be willing to work hard to maintain a friendship (and to be open to the fact that, despite all your best efforts, you might still fail), the sequel had a more generic "believe in yourself" message.

The aforementioned narm and cheese typically aren't debated, but it really all tends to fall more into the realm of Narm Charm for many who grew up with it as kids.