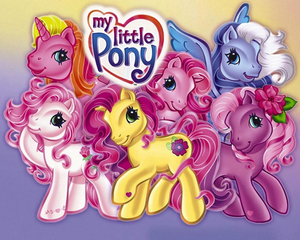 Collectors unofficially refer to this incarnation of the My Little Pony franchise as G3. This is a series of Direct-to-DVD movies, specials, and shorts released throughout the turn of the millennium. Somewhat akin to My Little Pony Tales, these stories tended to be about friendship, Slice of Life, and being yourself.

The animated specials were animated by SD Entertainment, Wang Film Productions (G3 only) and Kunoichi, Inc. (for Once Upon a My Little Pony Time, the G3 Newborn Cuties short) and were distributed by both Paramount and Shout! Factory. They are divided into 12 specials. The most notable ones were:

The first G3 special. Released on December 8, 2003 in a VHS packaged within the first release of the G3 toys. Chronologically taking place before Dancing in the Clouds, it shows how the ponies in Ponyville planned a special surprise party for Kimono. It was released later as a bonus episode in The Princess Promenade DVD.

Dancing in the Clouds

Released on December 2, 2004, the second special is packaged with a Pegasus Pony toy, Star Catcher. Chronologically taking place after A Charming Birthday and before Friends Are Never Far Away, it shows Star Catcher's first encounter with Sky Wishes. Released later as a bonus episode in A Very Minty Christmas DVD.

Friends Are Never Far Away

Friends Are Never Far Away is the third special released on April 6, 2005 on DVD packaged alongside the Pegasus pony named Hidden Treasure. It's the sequel of the last feature Dancing in the Clouds, as it explains how Star Catcher and Skywishes help the Pegasus Ponies to make friends with the residents of Ponyville. Released later as a bonus episode in Crystal Princess: The Runaway Rainbow DVD.

Released on October 25, 2005 by Paramount Home Video, A Very Minty Christmas is the first feature length special of the G3 series. The special is set after Friends Are Never Far Away, focusing on Minty as she accidentally breaks the "Here Comes Christmas Candy Cane", which apparently guides Santa Claus to Ponyville. To try to make-up for doing this, Minty gives each pony one of her socks. When Pinkie Pie finds out what Minty has done, Minty states that the sock giving is a bad idea, and then decides she should go to the North Pole herself to set things right.

It included Dancing in the Clouds as a bonus episode.

The second feature length special released on February 7, 2006 by Paramount Pictures, The Princess Promenade is the first film to promote the Crystal Princess line and debut of the Breezies and the 2006 re-design of Spike. The story focuses on Wysteria, on her experiences of being a princess and how it isolates her from being with her friends.

It included both A Charming Birthday as a bonus episode and an epilogue story titled Pinkie Pie and the Ladybug Jamboree, which focuses on Pinkie Pie's band performance.

The second film to promote the Crystal Princess Line, The Runaway Rainbow was released on September 12, 2006 and it features the Unicorn Ponies and the debut of Rarity. The story focuses on the First Rainbow of the Season as everyone in Ponyville prepares and awaits for it. Meanwhile at the magical city of Unicornia, Cheerilee is teaching a young unicorn pony named Rarity about being a Rainbow Princess and her duties to make the First Rainbow of the Season using the magic wand. Rarity is still young and she accidentally uses the wand, which in turn teleports her into the middle of Breezie Blossom. Cheerilee, Brights Brightly and Whistle Wishes venture outside Unicornia in search of her. Rarity befriends the Breezies and they visit Ponyville and later Rarity feels homesick. Pinkie Pie, Minty, Rainbow Dash, Spike and the Breezies help her get home, just in time for the first rainbow of the season.

It included both Friends Are Never Far Away as a bonus episode and an epilogue story titled Greetings from Unicornia, focusing on Rainbow Dash's experience in the magical city of Unicornia.

A Very Pony Place is the most unique of all G3 specials. Released on February 6, 2007, it features three different stories. The first one, Come Back, Lily Lightly focuses on Lily Lightly and her ability to make her horn glow when she giggle, forcing her to run away from Unicornia. Two for the Sky focuses on Storybelle and her story about Star Flight and Heart Bright's dreams of flight. The third and final story, Positively Pink focuses on Pinkie Pie, Minty and Puzzlemint on planning Pinkie Pie's birthday in secret.

In 2007, Hasbro, while retaining body shape, has reduced the number of characters to seven: Pinkie Pie, Scootaloo, Toola-Roola, Rainbow Dash, Sweetie Belle, Cheerilee and Starsong. The Core 7 era saw a number of animated shorts, until another change came out. Generation 3.5, as collectors call it, retained members but changed their body shape similar to the Ponyville line of smaller plastic molds that released years ago.

Twinkle Wish Adventure is the only feature length G3.5 Special. It was released in October 13, 2009 to promote this particular toy line. The story tells about the Winter Wishes Festival finally coming and all the ponies in Ponyville are excited to see Twinkle Wish, a wishing star who grants each pony one special wish. However, after Twinkle Wish gets kidnapped by a dragon named Whimsey Weatherbe, the entire event is facing a big dilemma and it's up to Pinkie Pie and her friends to get her back before the night of the festival, otherwise, everyone's wishes won't be granted, and the festival would be ruined.

It included the prologue story Waiting for the Winter Wishes Festival as a bonus episode.