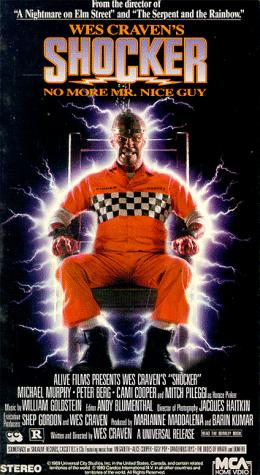 Shocker is a horror film directed by Wes Craven which was released in 1989.

The film centers around young Jonathan Parker (Peter Berg), who starts having prophetic dreams of Serial Killer Horace Pinker (Mitch Pileggi) after he kills most of his foster family. Seeking justice, Jonathan turns to his police officer foster father Lt. Don Parker (Michael Murphy) and convinces him that he can track Pinker through his dreams. With Jonathan's help police are able to capture Pinker, who is sentenced to die in the electric chair. However, before the moment of his execution Pinker makes a Deal with the Devil and becomes one with the electricity after his execution. This gives him the ability to possess the bodies of others, allowing him to continue his killing spree from beyond the grave.