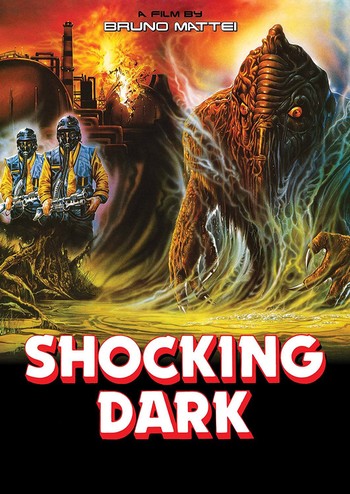 Shocking Dark, originally titled Terminator II, is a 1989 Italian sci-fi/horror film directed by Bruno Mattei and starring Haven Tyler, Christopher Ahrens, and Geretta Geretta. Despite the fact that it purports to be a sequel to The Terminator, the two films are unrelated, and the actual plot has more in common with another James Cameron film, Aliens, to the point that it lifts whole sections of dialogue verbatim from the latter.

In the year 2000, the city of Venice has been polluted to the point where an evacuation has been forced, and a group of scientists are sent by the Tubular Corporation to investigate the cause. They are assisted by an elite team of commandos known as the Megaforce as they search a vast underground complex located beneath Venice's streets. As they venture through the complex, they are attacked by crazed humans and bio-mechanical monstrosities.

See Alien 2: On Earth for a similar Italian knockoff/unofficial sequel. For the actual sequel to The Terminator, see Terminator 2: Judgment Day.