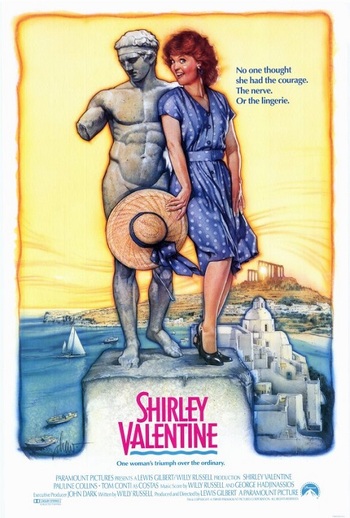 Shirley Valentine is a play by Willy Russell, first performed in 1986. It tells the story of a middle-aged working-class housewife who rediscovers the joy of living on a holiday in Greece.

The play has only one visible character, Shirley Bradshaw, and takes the form of two monologues: one in Shirley's kitchen on the eve of her departure, in which she describes her life and explains how she got the opportunity to go to Greece and why she decided to take it; and the second on a beach in Greece, in which she describes the outcome of her holiday.

Noreen Kershaw played Shirley in the original Liverpool production, but the role is most associated with Pauline Collins, who starred in the 1988 West End and 1989 Broadway productions, and also in the 1989 film adaptation. The film, directed by Lewis Gilbert and with a screenplay also by Willy Russell, opens out the action and shows many of the events only described in the stage version.

Other productions provide examples of: