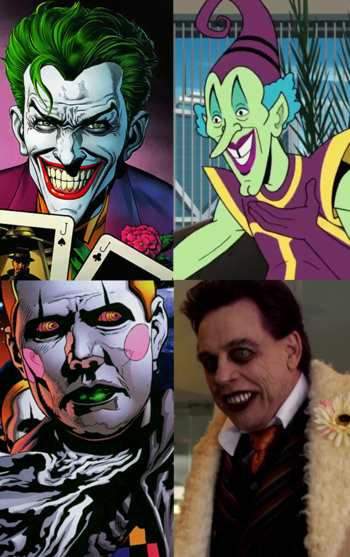 "How many of us are there?" "Who knows? I've killed at least a dozen." note Clockwise from upper left: the Joker, Presto-Change-o, The Trickster (Earth-3) and the Painted Doll. All but the Painted Doll have been portrayed by the same guy.
"Heath Ledger's performance in The Dark Knight is more disconcerting than a cold blood shower with your father. And like Vader and Lecter, the Joker caused a chain reaction of copycats, which has now looped around ouroboros-style to Jared Leto's upcoming portrayal of The Joker in Suicide Squad. The only problem here? Ledger's Joker has become the go-to blueprint for every goddamn villain out there."
— David Christopher Bell, Cracked, "6 Reasons Heath Ledger's Joker Ruined Comic Book Movies"

Just as Batman is one of the most popular superheroes of all time, his Arch-Enemy the Joker is one of the most popular supervillains. And much like how the Batman Parody is an Expy of Batman, the Joker Impersonator is modeled after the Clown Prince of Crime. A chaotic and unhinged villain with a tendency for slasher smiles and a usually bombastic attitude, the Joker Impersonator tends to have at least a few of the following traits:

It's worth noting that the Joker's design was largely inspired by Conrad Veidt's depiction of Gwynplaine, from the 1928 film adaptation of The Man Who Laughs. Unlike the Joker, however, Gwynplaine was a wholly good character who simply looked disturbing because of the Glasgow Grin he suffered from.

It is an ancient extraterrestrial being who takes on the form of a clown named Pennywise the Dancing Clown to entice children.

It is an ancient extraterrestrial being who takes on the form of a clown named Pennywise the Dancing Clown to entice children.