This Is for Emphasis, Bitch! 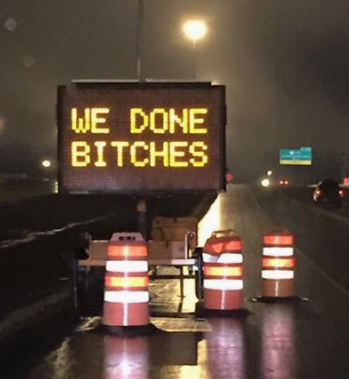 Wait... Those road workers did female dogs?
Buffy: What are you doing here? Five words or less.
Spike: [counting them off on his fingers] Out. For. A. Walk. [realizes he still has the thumb] Bitch.
— Buffy the Vampire Slayer
Advertisement:

Describe This Is For Emphasis, Bitch, Bitch!

It's ending a sentence with a comma and "Bitch!" (no other swear word, just "bitch"note African-Americans may sometimes use "nigga", but usually only amongst themselves), as a way of verbally making an exclamation point in dialog.

It did get overused, so now it's a Discredited Trope. You're as likely as not to see it thrown into a sentence just to be funny, even when there is not really a reason to emphasize a point this way.

This does not count when merely calling someone a bitch. This is about using it as a form of verbal punctuation. If there is anything between the comma and "bitch", it doesn't count. (You know that famous line in Aliens? Not this trope.) Additionally, using any swear word other than "bitch" does not count for this trope either.

It can be put at the beginning of the sentence, but the same rules apply to conform to this trope.

This can overlap with Quote Swear Unquote, Obligatory Swearing.

Compare (but would not overlap with) Verbal Tic, Precision F-Strike. Also worth noting that "Bitch" is considered a Gendered Insult. See also Spelling for Emphasis for a politer way to emphasise.