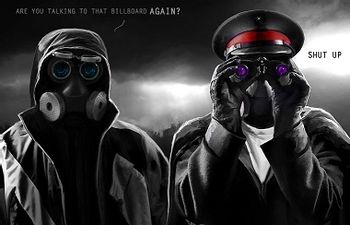 You call this an article?
"You are walking west.
You find a wishing well.
You wish for it to grant infinite wishes for every human being on earth.
The Universe is now broken. Also, everyone is dead.
Good job."
— General info

The nuclear Apocalypse has come and gone, scarring the cityscape into an almost unrecognizable scene of twisted metal. Dangerous mutant animals prowl the dark recesses of the underground tunnels. Aliens pop up every once in a while to steal one of the few surviving members of the human race.

So life is a constant battle just to stay alive, right?

Actually it's really, REALLY boring. Aliens and monsters are few and far between, so mostly you just have the barren wasteland, its long dead skeletal occupants, whatever you manage to find, plus your imagination to keep you entertained.

Meet The Captain and his/her team: Pilot, Sniper (a.k.a. "Mr. Snippy"), and (later on in the webcomic) Engineer (a.k.a. "Engie"). They're going to attempt to stay alive in this dangerous environment. But mostly? They're going to try to keep themselves from succumbing to boredom.

Compare Gone with the Blastwave.

You can read the comic here

This Comic has also been dubbed, twice! Once by The Beard

. The Beard's dubs are shorter and more to the point while NetsWorld's are longer and have multiple stories in them. Both are very excellent!

Of course, once in a while, there's going

to be some grand adventure

to be had by the group