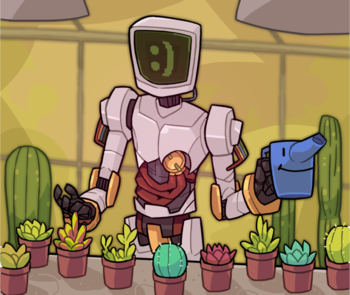 I am happy! :)
"There is no emoticon for what I am feeling!"
— Comic Book Guy, The Simpsons
Advertisement:

It's an online trope about using typing characters to represent symbols, often to show emotions or to punctuate a point.

The format is usually a sideways face with the eyes on the left and the mouth on the right. (e.g.: ":)") Optionally there is a dash to represent the nose. Another format is an underline or period in the center for the mouth, and two things on the side for the eyes. (e.g.: "(‐'.'‐)") These are often called "Kirbies" by English speakers. The first type is generally more Western, while the second has a stronger Asian heritage, and was imported from Japanese textboards and popularized in the West on anime forums.

◊) was on the Carnegie Mellon University computer science general board September 19, 1982 at 11:44am EST by Scott E. Fahlman:

I propose that the following character sequence for joke markers:

Read it sideways. Actually, it is probably more economical to mark
things that are NOT jokes, given current trends. For this, use

Within a few months usage and variations had spread to the ARPANET and Usenet. (The message shown here was thought lost forever before it was found 20 years later on some backup tapes.)

Message Boards often have pre-made pictures that replace the symbol you type. And of course there is Emoticon Wiki

In recent years, emoticons have been widely replaced by emojis in social media and texting, which are a Japanese import that presents pictograms to relate ideas and concepts.

For the Just For Fun page where you can make your own here. Our Forum also has an emoticon thread here