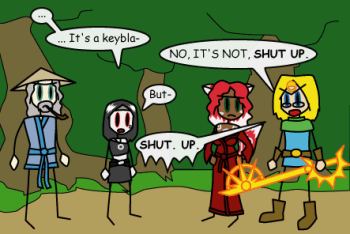 Of course it's not a keyblade. *cough*
Advertisement:

was (see Orphaned Series, below) a Stick-Figure Comic set in Creation, the world of the Exalted roleplaying game. It follows the adventures of a quartet of Exalted as they quest to retrieve five magical keys that hold the evil Primordials sealed away: Misho, a Twilight Caste Solar, who has all of his Exaltation's memories dating back to the First Age, but no memory of his current mortal life, which can't possibly be suspicious; Marena, a Changing Moon Caste Lunar with a fox totem, a flirtatious, fun-loving, confident woman... who's quite possibly the most terrifying of the group; Secret, a renegade Day Caste Abyssal with some major self-esteem problems; and Ten Winds, an elderly Air Aspect Terrestrial, formerly a monk in the Immaculate Order, who left because he grew disillusioned with the Order, and because he enjoyed the pleasures of the world a bit too much.

Genre Savvy and awareness of game mechanics is universal, and a source of much of the humor. The art style and premise were inspired by the The Order of the Stick, but Keychain spends less time lampshading the conventions of the RPGs and fantasy stories and more time on the over-the-top action that's made Exalted famous.

Unfortunately, the webcomic is on apparently-permament hiatus as the author developed tendonitis, and the most recent update was back in April of 2011. Even so, he has been devoting the time he would have otherwise spent on the comic to writing homebrew material for the Exalted setting, which is worth a look at.

A mirror of the comic exists here