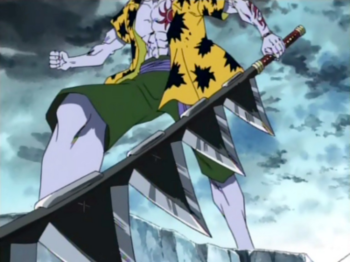 Edges are like an exponential factor of visually-implied sharpness.
"This is an Ulgo knife, Sariss. It causes almost no damage when it goes in, but when you pull it out, it jerks out all kinds of things along with it. Now, we aren't going to make any kind of outcry, are we?"
— Issus, King of the Murgos
Advertisement:

Bladed weapons, including swords and knives, are often used by both good and bad guys all around. One good way to make said weapon more distinct or interesting is giving it a jagged edge, similar to a saw.

Such weapons can vary from actual saws to swords or daggers with an irregular, barbed edge, which can be used to actually saw harder materials while not fighting, breaking enemy weapons or inflict nastier wounds (especially if the weapon is stabbed into someone). Sometimes, spears and arrow-tips will display a barbed design to make them hard to remove from the wound.

Usually not Truth in Television, precisely for the above reason: serrated weapons are more likely to get stuck in armor (or people), making them a lot less useful in a fight. There's a good reason no culture on Earth has relied too heavily on serrated weapons.

Those weapons tend to be linked mainly with evil guys or chaotic warriors, usually because of the association with Spikes of Villainy, or the primitive look of the weapon, not mentioning the nasty wounds caused by said weapons. Good guys can use this kind of weaponry, but they'll usually avoid the "stabbing" part and/or rely on slashing motions, making the weapon less effective at chopping. Or else they'll be a case of Good Is Not Nice. Sometimes a Combat Medic or a Mad Scientist will wield one of these.