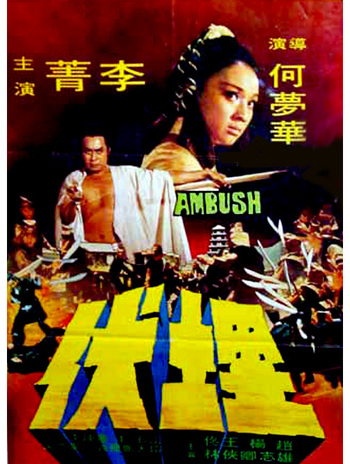 It's an Ambush!
Advertisement:

Ambush is a 1971 wuxia swordplay action-drama directed by Ho Meng-hua, produced by Shaw Brothers starring Chao Hsiung (in his sole leading role, the studios are no doubt attempting to groom him into another major star, which unfortunately isn't as successful), Li Ching, and Dean Shek.

In the aftermath of an Ambush (hey, that's the title!) an Imperial convoy carrying a crate of priceless jewelry gets raided, with the convoy's Chief Escort, Fan Zhi Long, presumed dead. The bandits responsible for the raid however lose the jewels, and Constable Wen Chao Fan (Chao Hsiung) ends up becoming a suspect for working with the bandits. On the run from the law and becoming a wanted fugitive, Wen must recover the jewels in order to clear his name, but unfortunately he's not the only one seeking the treasure.