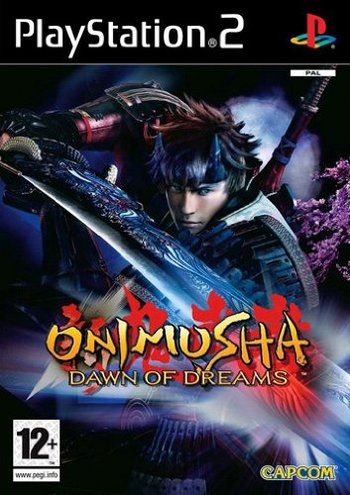 The ending is approaching...
Advertisement:

Onimusha Dawn of Dreams, known in Japan as Shin Onimusha: DAWN OF DREAMS (新 鬼武者 DAWN OF DREAMS), is the (so far) last original entry of the Onimusha series published by Capcom, and the magnum opus of the tetralogy, released for Playstation 2 in 2006 in both Japan and later, on March, in Europe and the USA. It is the sixth game of the series as a whole, but the fourth canonical entry.

With the death of the tyrannical Oda Nobunaga and the sudden disappearence of Akechi Samanosuke, Japan was seemingly freed from the threat of the Genma, and unified under the banner of Toyotomi Hideyoshi. Under his rule, the land has seemingly found peace at last... but soon, dire events strike the land of the Rising Sun: plagues, wildfires, floods, volcanic eruptions, and Toyotomi leading the nation into an invasion of Korea. And while all of this happens a sinister celestial body that people call the Omen Star has appeared in the skies, leading many to speculate that it is a sign of doom for Japan. The Genma have returned in semi-secret, this time serving Toyotomi, having sworn to aid his attempts at foreign conquest by turning soldiers into bloodthirsty human-Genma hybrids with the "Genma Insects" spawned by the mysterious and unnerving Genma Trees.

However, a mysterious blond warrior, clad in a blue armor and carrying two huge swords on his back, stands up to oppose the Genma and destroy Genma Trees whenever he can find them: he's known as "Soki, Oni of the Ash". His struggle against the forces of evil doesn't go unnoticed, and soon enough, he's surruouned by a small party of comrades: the wandering swordswoman Yagyu "Jubei" Akane, granddaughter of the old Jubei, the mysterious warrior monk in red armor Tenkai Nankobo, Soki's childhood friend turned gunslinger Ohatsu, and the huge Roberto, a foreigner whose arms contains an eldritch power. This brave band of Onimusha prepares to undertake a long and dangerous journey to defeat Hideyoshi and put an end to the Genma's presence in Japan once and for all.

Firstly, Onimusha Dawn of Dreams features many, many departures from the original "Oda Nobunaga Trilogy": it's far more action-packed, with the horror elements mostly gone in favour of huge environments, a free-rotating camera, exploration and less emphasis on puzzles, reduced mostly to keys required to proceed or to optional chests which can be smashed open (though the item inside will be unidentified). Also, rather than have the secondary characters as support or alternatives, you can actually explore levels with another party member, order him around and even switch controls between Soki and his companion in order to traverse certain levels which are normally not accessible to him, with each party member having his/her own quirks, strong suits and abilities. Also, it features more RPG elements, such as Relationship Values with the party members (who can use materials to forge items) and, rather than a small pool of magic weapons for each character, you can find entire arsenals of weapons, usually at least 3 for each element, for the heroes to use, as well as much more accessories to power your characters up. It also does away with prior games depicting the main character in Ink-Suit Actor fashion and pursues more original, unique designs for each character. Finally it lasts much longer, nearly as long as the previous games combined, and the story is divided in two disks.

Sadly enough, the game sold rather poorly, all things considered, but it was appreciated by critics, receiving mostly positive reviews and being praised for the refreshed gameplay and story, though a few weren't impressed by the voice acting or some of the cutscenes.

It received two manga adaptations which provide a little backstory, the prologue manga TWILIGHT OF DESIRE, and a CG movie made from cutscenes which pretty much tells the story from the POV of Jubei. Soki also appeared as a playable character in Tatsunoko vs. Capcom.