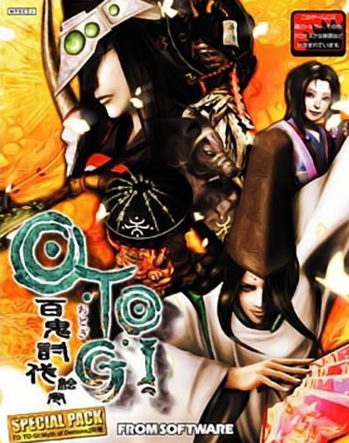 Otogi: Myth of Demons is what happens when FromSoftware take a legendary figure from Japanese history and the tales that surround him, and turn it all into a 2003 Action RPG for Xbox.

At the beginning of the game, Raikoh wakes from his death, revived by a shadowy princess. She tells him that someone has broken the seal that protects the human world from demon kind, and tasks Raikoh to find this person, and execute them. He is also to find a way to restore the seal that was broken, but neither of these tasks will be easy. With the seal broken the human world has been flooded with demons who will show no mercy to any that cross their path.

The game itself is wonderfully done. The environments are stunningly beautiful, not to mention downright eerie in some places. The music is based off traditional Japanese instruments, and offers one of the best examples of Soundtrack Dissonance in any videogames. The controls are simple and effective, and the combat both brutal and elegant. Indeed, it remains one of the only games to effectively combine Hack and Slash with Crouching Tiger style Wire Fu. The game also features destructible environments. If you can hit it (or hit an enemy into it), then you can probably break it. From buildings, to castle walls, to trees, and in some places even the floor, you can leave half a ton of rubble in your wake. Preferably with some enemy demons buried in there somewhere...

The demons that you fight are also deserving of mention as each is given descriptions that you can read before the levels, which not only tells you what to expect when fighting them but describes them in a way that is evocative of their origin from Japanese mythology.

The Sequel, Otogi 2: Immortal Warriors was released in 2004. However, it takes place years after the first and introduces five new playable characters, for a total of six. Its story opens with Seimei, a poweful Onmyoji, being pursued by the Nine-tailed Fox. She manages to escape and makes her way to the tree Raikoh sealed himself into at the end of Otogi. There she is joined by the Shitennō, The Four Guardian Kings, Kintoki, Tsuna, Sadamitsu, and Suetake.

In order to unseal and revive Raikoh, the Shitennō preform Ritual Suicide while Seimei chants in the background. Raikoh is revived, and so are the Shitennō. As in the previous game, they are all now trapped between life and death. With this, the 5 Immortal Warriors and Seimei set out to defeat the 9 Tailed Fox and bring peace back to the land.

Otogi 2 is an overall improvement; it looks better, has more content, and gives you five new unique characters to play as. In short, it's Otogi Turned Up to Eleven. Both games have often been lauded as two of the best if not the two best looking games on Microsoft's original console.

On November 15 of 2021, both games were uploaded to the Xbox Store as backward compatible titles for Xbox One and Xbox Series X|S.