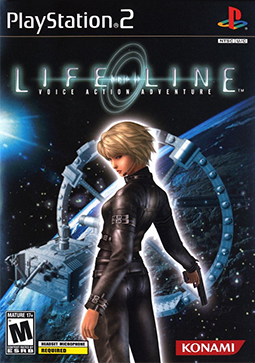 You may be looking for the mobile game series Lifeline instead. Or the Star Trek: Voyager episode, Star Trek Voyager S 6 E 24 Life Line

Operator's Side, released as Lifeline in North America by Konami, was a 2004 PlayStation 2 game by Sony Computer Entertainment (now known today as Sony Interactive Entertainment) that attempted a new spin on the Survival Horror genre by making the player Mission Control. Set in the year 2029, it casts the player as a young man visiting a newly opened, state-of-the-art hotel inside an orbiting Space Station. After monsters crash the party, the player awakens inside the station's main control center, with no clue as to how he arrived there or where his girlfriend is.

However, using the ship's various cameras, he locates a survivor — a cocktail waitress named Rio — and contacts her via her headset. From there, the player must guide Rio through the monster-infested station, gradually unraveling the truth behind the incident.

Instead of controlling Rio directly via a gamepad, the user gives her commands over a USB headset, with scripted voice commands such as 'shoot [the] head (or other weak point), 'dodge left/right/back', 'turn left/right', 'stop', 'run' and so on. The player can also direct Rio during cutscenes, make small talk, and even restore her health by playing tongue twisters with her.

Unfortunately, the voice recognition system wasn't very well polished; Rio frequently misunderstood commands or acted inaccurately, and the player had to speak very calmly and clearly to be understood. Conversations were limited to simple nouns and verbs, which became very frustrating during the game's many puzzles.

Operator's Side provides examples of: