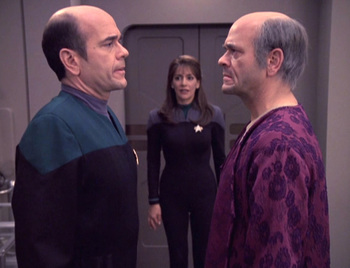 The Doctor meets his maker. No, literally. (Oh, hey, Troi.)
The Doctor receives word that his creator, Dr. Lewis Zimmerman, is in need of critical medical treatment and transmits himself to the Alpha Quadrant to take care of him. Unfortunately Zimmerman proves unwilling to be treated by a medical hologram whose model has long been superseded.