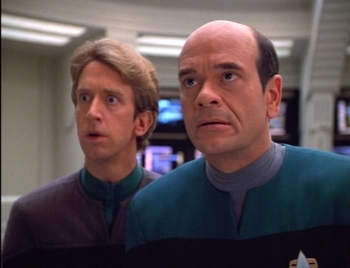 The Doc and the Dick.
Advertisement:

A vast alien communications relay gives Voyager a narrow window of opportunity to contact a Starfleet vessel, so the Doctor is transmitted to the Alpha Quadrant. Unfortunately the vessel is an experimental prototype that has been seized by Romulan commandos, and the Doctor must gain the co-operation of its Emergency Medical Hologram Mark Two (guest star Andy Dick IN SPACE!) to take back the ship. Hilarity Ensues.