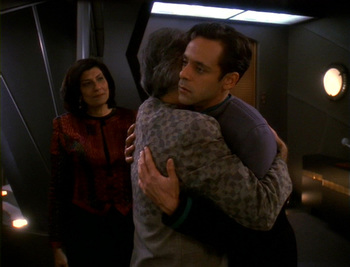 You got kids? 'Cause if so, this one's gonna hurt. note Hell, if you got parents, this one's gonna hurt.
As Rom struggles to work up the courage to ask Leeta out on a date, Deep Space Nine receives a surprising visitor: Dr. Lewis Zimmerman, a foremost Federation authority in holographic programming and developer the Emergency Medical Hologram, which bears his likeness. He has come to visit Julian Bashir with the hopes of making a new medical hologram with his likeness. In order to iron out any bugs and make the hologram as lifelike and human-like as possible, Zimmerman gives Bashir and his co-workers and associates extensive questionnaires, in so doing meeting Leeta and falling for her, to Rom's distress.
Advertisement:

When Zimmerman brings up asking for information from parents, however, Bashir clams up and asks Zimmerman not to include his parents in the interviews. This only serves to pique Zimmerman's curiosity, and he makes a point to contact Bashir's parents.

After showing an early prototype of the Long-Term Medical Hologram to Bashir, Zimmerman begins his interviews of Bashir's colleagues and acquaintances, also taking the opportunity to ask Leeta out to dinner, making Rom very jealous.

Later, Bashir gets a couple of surprise visitors that put him on edge: Richard and Amsha Bashir, his father and mother. Dr. Zimmerman had invited them onto the station against Bashir's wishes. Mr. Bashir is a man of many talents who works as a landscaper and speaks of using his skills to build legacies long after he is gone, and bragged about how he talked Julian into taking up medicine. Julian becomes cross with Zimmerman for going behind his back and bringing his parents onto the station against his explicit wishes.

As Zimmerman tries to convince Leeta to return to Jupiter Station with him with the offer of her own cafe, the Bashirs sit down to a very tense dinner, with Julian making passive-aggressive jabs at his father. He requests that his parents not go into deep detail about his childhood, making Richard upset about not being trusted with the secret that could spell the end of Julian's career and prison time for Richard and Amsha. In the end, however, Richard lets slip his secret unwittingly to the prototype LMH while Zimmerman and O'Brien watch; that Julian Bashir is an Augment, a genetically-enhanced human.

Julian is enraged that O'Brien, his trusted friend and confidant, helped to facilitate the secret come to light. He explains that, as a child, he was physically awkward and intellectually stunted. Just before he turned seven, his father took him to undergo accelerated critical neural pathway formation to enhance his intellect. In the end, Julian not only was a genius, but his physical capabilities began to improve. When he later realized what had happened, he ran away from home. O'Brien tries to assure Julian that his genetic enhancement didn't make him who he was as a person, but it doesn't matter; under Federation law, Augments were not permitted to enter Starfleet or practice medicine. With the likelihood of his background being investigated and his Starfleet commission being revoked, Julian feels that he is left with no choice but to resign before Zimmerman could file his report.

As Rom finds himself depressed over the prospect of Leeta leaving and receives a pep talk from his brother Quark, tempers flare between Julian and Richard. Julian calls out Richard for thinking more about his own legacy than caring for him as a person, forcing him to undergo gene therapy because he was disappointed in him as a disabled child. Julian says his father is more of an architect than a parent: "the man who designed a better son to replace the defective one he was given." Amsha, for her part, went along with Richard's plan because she felt guilty for Julian's slowness, that something went wrong with how she raised him or during pregnancy, and she wanted to give him a better life. Julian, nonetheless, is set in his course; he would go to Sisko and explain the situation before resigning and quietly leaving the station.

When Julian goes to Sisko's office, Sisko introduces him to Rear Admiral Bennett, a judge advocate general. Julian's parents had already explained the situation to Sisko, who contacted Bennett to make an arrangement that would allow Julian to keep his commission and his license to practice medicine; Richard would go to prison for two years after pleading guilty to illegal genetic manipulation. Richard decides to take responsibility for the crime that he committed. Bennett reminds us that genetic augmentation led to the Eugenics Wars two hundred years ago. For every honest Augment like Julian, there was a dangerous war criminal like Khan Singh, hence why genetic augmentation was outlawed by the Federation. With Richard accepting the deal to return to Earth and carry out his sentence, Julian says goodbye to his parents before they leave, but not before Julian thanks his father.

In the end, as Leeta makes ready to leave for Jupiter Station with Zimmerman, Rom finally musters the courage to admit his love for Leeta. Leeta readily accepts Rom's affections and decides to stay on the station, to Zimmerman's disappointment.