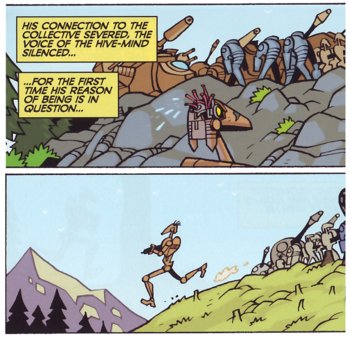 The Hive Mind's version of a Heel Face (or Face Heel) Turn. One problem with writing the members of the Hive Mind is that it leaves little room for individual characterisation since everyone pretty much acts the same way (their personalities being subordinated to the greater whole). Enter the rogue drone, a member of the hive whose mind has somehow broken off of the central entity, opening up the path for him to become an unique character on his own right.
Advertisement:

Rarely does the drone itself choose to be that way, though. It may be that the drone has displayed "odd" behavior even before their change, and a rare few may even have developed individuality on their own. Most of them, however, are simply victims of circumstance, who were genuinely faithful and devoted servants up until the point when enemy influence or an unfortunate disaster disconnected them from the central core. For most drones, this is a life-shattering event. Most of them do not have a natural concept of individuality, and without a higher authority to make decisions for them they become lost and confused. A lot of them attempt to rejoin their hive, only to be driven away because Individuality Is Illegal.

Many feel incapacitated and insignificant on their own. Human social hierarchy can work as a substitute, and many of them end up joining the main cast as the Token Heroic Orc. Developing a personality is both a challenge and a source of anguish (as it removes them even further from their peers). Choosing a name is often depicted as one of the first milestones they need to conquer. Expect them to still go on long rants about how individuality is incomparable to the satisfaction of being part of a greater whole. They are often subject to the the Pinocchio Syndrome as they are trying to understand human customs and thinking.

It should be noted that while in most cases the Hive Mind is depicted as "evil" and the rogue unit as "good", this is sometimes reversed. Deserters from a good overmind tend to be a lot more powerful and destructive, undermining their own hive from within abusing the fact that the hive does not expect its members to turn on each other.

A variant of My Species Doth Protest Too Much. Compare the Phlebotinum Rebel. See also Grew Beyond Their Programming.